Today, Governor Abbott signed HB 25 into law, despite the powerful testimony of trans kids and adults, families, and advocates, and the many emails and calls to his office asking him to veto this harmful piece of legislation.

This bill will require K-12 youth to participate in sports according to the gender on their birth certificate, essentially banning transgender and intersex youth from participating in line with their gender identity and barring them from the friendship, education, teamwork, and health benefits of playing a sport. Let us be clear: this is cruel, dehumanizing, and harmful.

The harm caused by this brand new law is already prevalent. Transgender youth bravely told their stories directly while advocates like Equality Texas presented data on the increase in bullying, calls to suicide hotlines, and physical assault stemming from the rhetoric from hearings and debates about anti-trans sports bans. Our pleas for dignity, respect, and the safety of trans and intersex kids in schools went unheard and in some cases was blatantly ignored by the elected officials responsible for this law. Our message to these lawmakers is simple: we will not forget this. By waging a 10-month assault decrying the humanity of transgender Texan children, they have violated their civic duty to represent and protect their constituents.

Equality Texas wants you to Turn OUT for Texas. We must hold lawmakers accountable for their cruelty and violation of their duties. And we need your help.

Donate to our Turn OUT for Texas Education Fund, to support our voter education work ahead of the 2022 elections and make sure we never have to experience another legislative year like this one.

Our inboxes have been flooded with a marked increase in inquiries for help from school teachers, parents, and children in Texas. Some of the heartbreaking stories we’ve heard this year describe an increase in bullying, physical assault, and anti-LGBTQ+ actions directly from administrators. If our school districts won’t protect LGBTQ+ youth, we must elect lawmakers who will. 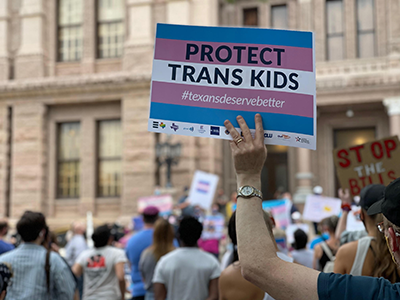 We know why this is happening: this year in special session after special session the legislature cruelly fanned the flames of anti-LGBTQ+ hate in this state in an attempt to gain votes through fear. We can’t let hate win. Only by electing pro-equality candidates can we ensure that horrific legislation like HB 25 and worse doesn’t pass in 2023.

Invest in changing in the hearts and minds of fellow Texans today and for the future. Help us establish a strong foundation by giving a one-time donation or joining the Texas GEMS, our group of monthly donors. It’s been a long and brutal assualt, but we will not stop fighting to protect our community. We won’t let a handful of extremists speak for the vast majority of Texans who firmly believe that discrimination against trans and LGB+ people is wrong.