Dallas, TX (April 29, 2016) – Today, a Denton County family with a transgender child, along with Equality Texas, the largest statewide organization dedicated solely to fighting for LGBT equality in Texas, announced communications between Tracy Murphree’s office had been abruptly cancelled.

Murphree, a Denton County candidate for sheriff, used his Facebook account on April 22, 2016, to say he would violently attack a transgender person who uses the same bathroom as his daughter.

“This whole bathroom thing is craziness I have never seen. All I can say is this. If my little girl is in a public women’s restroom and a man, regardless of how he may identify goes into that bathroom. He will then identify as John Doe until he wakes up in whatever hospital he may be taken to. Your identity does not trump my little girls safety,” 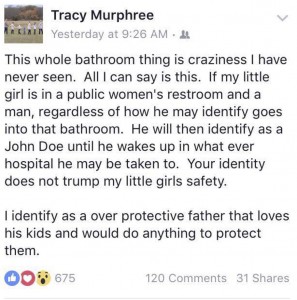 Denton County residents Adam and Amber Briggle are parents of an 8-year old transgender child. They have publicly expressed their concern with Murphree’s inaccurate and insensitive statements with a blog post titled You, Ma’am, Need Jesus. As parents they are deeply concerned that a member of their family could be attacked or criminalized simply for being who they are. A meeting scheduled for Thursday morning between representatives of Equality Texas and Mr. Murphree was cancelled on Wednesday evening by Murphree who stated “I won’t be at the meeting tomorrow. I feel I have made my position clear that I am not targeting transgenders but concerned about predators taking advantage of the policies. I really have nothing else to add.”

In a response from Equality Texas, board chair Steve Rudner told Murphree, “What you’ve not done is allow yourself the chance to listen.” The full text of Rudner’s response to Murphree is available here.

Research shows that the best spokespeople to respond to “pottie hysteria” are law enforcement officials and transgender men and women, because claims that transgender individuals are a threat to bathroom safety are simply not borne out by real facts or experiences.

“At Equality Texas, we understand that people don’t have a good understanding of transgender people. Even more so if they have not met or talked to someone who is transgender. By challenging inaccurate representations of the transgender community, we can help ensure that everyone has accurate information to make informed decisions on public policies that affect their lives, health, and well-being,” said Chuck Smith, CEO of Equality Texas.

“As residents of Denton County, we are deeply disappointed that Murphree has not taken the opportunity to listen. As he seeks to fill the top law enforcement position in the County, with a department that has not yet solved the murder of Artegus Madden, a transgender woman of color murdered nearly three years ago, it concerns me that such violence will get even less attention under the leadership of someone who has openly advocated violence against our community. I hope he will understand that if he wants to lead, listening will be a vital and important skill,” said Denton County resident Kathryn Winters.

At Equality Texas we believe it is inappropriate and unacceptable for any law enforcement official to make inflammatory statements that condone violence against any member their community. No Texan should ever have to live in fear of violence because of their gender identity or gender expression, especially from someone that has taken an oath to serve and protect them from harm.

Equality Texas will continue to work with the Briggle family, local organizations, and Denton County area residents to end falsehoods about the LGBT community that do nothing to serve and protect victims and potential victims of violence. We believe ending sexual violence begins by treating all people, including those who are transgender, with fairness and respect.