LGBT, Diversity and Me: This is My Life 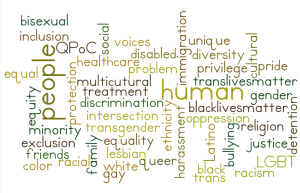 Since June 26, 2015 aka “Decision Day,” many people throughout the United States have heard the words, “What’s next?”

Whereas some see it as a shift in focus with the changing post-marriage equality landscape, Queer People of Color (QPoC) in South Texas [and beyond] see it as an opportunity to continue existing conversations. An opportunity to push forward with a vision of a Texas where lesbian, gay, bisexual and transgender Texans and their families have full equality. As a queer-Latino activist these are a few areas that need more work:

The realities of QPoC facing double oppression is real. Not only do they have to deal with racism based on the color of their skin, they also have to deal with phobias based on their sexual orientation, gender identity and/or expression. It’s important to note that racism occurs within the LGBT community and not just from outside communities. As a result of one’s phobias and/or racism, the likelihood of assaults and violence committed against QPoC greatly increases, not to mention, discrimination in employment, housing, and education.

Estimates show that there are approximately 267,000 undocumented immigrants that identify as lesbian, gay, bisexual or transgender. Undocumented QPoC are among the most vulnerable members in our society. A path to citizenship would end discrimination against binational same-sex couples, increase employment stabilization, fix income disparities, and spearhead accessibility to healthcare as well as greatly increase the educational opportunities available to queer-identified youth. We must not overlook our queer brothers and sisters that are detained and currently awaiting legal action. Lack of guard training, excessive lengths of time in confinement or lock down and lack of proper medical care are among the many issues faced while in detention, especially by trans women.

The affluent image that’s painted with a life of luxuries, travel, nice cars and well-paying jobs has no basis of reality for most gay and transgender individuals and families. What this stereotype fails to represent is the higher rates of poverty faced by the gay and transgender community. Homelessness, employment, and housing discrimination, as well as low wages, are among the issues experienced. And given the racial issues this is even more rampant for QPoC.

These are just three examples of areas that need extensive work to bring about solutions and change. Fully inclusive nondiscrimination laws and ordinances that protect the LGBT community on a local, state and federal level are essential to combat many of these and other issues. In addition, increasing the conversation beyond our comfort zones is an absolute must.

One of these conversations is taking place Thursday, August 6th and Friday, August 7th, at the first LGBTQ PoC centered conference in RGV. Aqui Estamos will focus on visibility, strategizing, and community. If you’re able to attend, please do so. Visit their website at aquiestamosrgv.org.