Not out of the woods yet!

Only one more week until the end of special session.

And if you believed the New York Times headline “Texas Transgender Bathroom Bill Falters Amid Mounting Opposition”—you’d think the anti-transgender “bathroom bill” threat had no teeth.

But we are NOT out of the woods yet.

Remember: Dan Patrick made anti-transgender “bathroom bills” his top legislative priority on day ONE. And you can bet that, as the end of special session looms near and discriminatory “bathroom bills” continue to stall, he’s doubling-down—ready to bully his colleagues with threats of primary challengers and smear campaigns. Whatever it takes to force them to pass his discriminatory bills.

Anything can happen in seven days. Our job is to hold strong. Rush a message to your representatives now and urge them NOT to sign onto anti-transgender “bathroom bills” and to vote NO if this legislation reaches their desks. 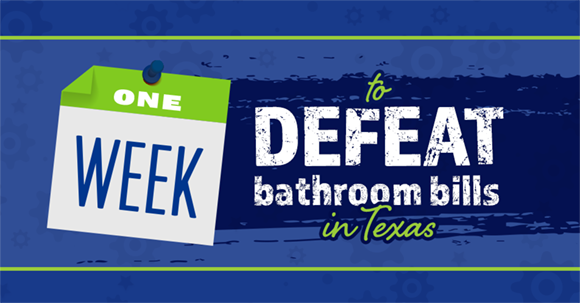 Right now, the single most dangerous threat to our ability to defeat discriminatory “bathroom bills” is complacency, Deanne.

The Senate was able to pass discriminatory SB 3—including dozens of hours of public testimony and debate—in less than two days. And right now, the House of Representatives is sitting on three “bathroom bills,” ALL of which could pass in the next seven days if state reps decide to take action.

The reason they haven’t yet? You. Thanks to you we’ve generated hundreds of phone calls to lawmakers and thousands of emails. We’ve helped bring dozens of women’s advocates, families, law enforcement officers, and small business owners to the Capitol to tell their elected officials: We reject anti-transgender “bathroom bills.”

And lawmakers are listening. But now is NO time to slow down. We have got to keep pressuring lawmakers from now until the minute they gavel out so that they remember: They don’t answer to Lt. Gov. Dan Patrick—they answer to us.

Rush a message to your representatives right now and urge them to oppose discriminatory “bathroom bills!”

We’ll keep you updated every step of the way from now until lawmakers gavel out on Wednesday, August 16th.

P.S. You should also know, the primary reason for this special session was so that lawmakers could pass what is referred to as the “sunset bill.” So far, they have failed to do so. If the sunset bill doesn’t pass in the next seven days, there’s a chance that Gov. Abbott could call another costly special session—meaning “bathroom bill” legislation could come back. We are still facing a steep and potentially long-winded battle against efforts to advance state-sanctioned discrimination against our transgender neighbors and friends. And we need you to speak out now. Tell your lawmakers to oppose “bathroom bills” now and forever, because discrimination has no place in Texas!