Just two weeks after it died in the Texas House, a measure designed to subvert a potential U.S. Supreme Court ruling striking down the state’s ban on same-sex marriage has been suddenly revived in the Texas Senate. 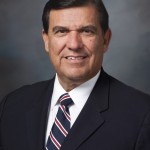 Sen. Eddie Lucio, D-Brownsville, chair of the Senate Intergovernmental Affairs Committee, added to an omnibus bill on county government — HB 2977 by state Rep. Garnet Coleman, D-Houston — language from state Rep. Cecil Bell’s failed HB 4105. HB 4105 would have barred state and local officials from licensing, enforcing or recognizing a same-sex marriage even if the Supreme Court rules in favor of the freedom to marry for gay and lesbian couples.

The committee first approved the revised HB 2977 Monday night. The committee took a second vote today after some committee members objected that Sen. Lucio hadn’t told them that the marriage language had been added to the bill. Sen. Lucio, a Democrat, voted with three Republicans to approve the revised bill. Two Democrats, Sen. Sylvia Garcia of Houston and Sen. José Menéndez of San Antonio, voted against.

“Sen. Lucio’s attempt to stain Texas’ reputation with this retrograde legislation demonstrates that he’s on the wrong side of history and not in line with Texas values. In the long run, we are confident that the Supreme Court will grant loving LGBT couples the freedom to marry in Texas. And we call upon the Senate to defeat this attempt to enshrine discrimination in our state.”

“At its core, the amendment added to HB 2977 by Sen. Lucio is an attempt to subvert any future ruling by the U.S. Supreme Court on the freedom to marry. Pursuing a strategy to defy the Supreme Court will cost Texas taxpayers millions in litigation and cause great damage to our economy and reputation. In its present form, HB2977 must be defeated.”

“This reckless move tosses aside the state’s responsibilities under the U.S. Constitution and callously betrays loving gay and lesbian couples who simply want to make a lifetime commitment and protect their families the same way everyone else does. Every senator, regardless of party, should reject this revised bill and save Texas from the same firestorm of criticism that swept through Indiana and other states that have passed legislation promoting discrimination against LGBT people and their families.”

“This amendment sends an extreme message about the future of the Lone Star State – a future where all Texans are not welcome to live and thrive. Texas Senators must do everything in their power to stop this destructive and divisive assault on LGBT Texans and their families before it inflicts needless damage on this great state.”

ACLU of Texas (aclutx.org) is a guardian of liberty, working daily in courts, the Legislature and Texas communities to defend and preserve the individual rights and liberties guaranteed to all in the Bill of Rights of our Constitution.

The Human Rights Campaign (hrc.org) n is America’s largest civil rights organization working to achieve lesbian, gay, bisexual and transgender equality. HRC envisions a world where LGBT people are embraced as full members of society at home, at work and in every community.