Right now, my son’s life is on the line and I need your help.

My son Landon is transgender. In his words that means his mind hasn’t always matched his body. So, even though he was born a girl, he’s always known he was a boy. And when he was eleven he came out to us, and started living and presenting every day as the boy he’s always been.

But right now Landon is in serious danger. This year, we’ve watched anxiously as Texas state lawmakers introduced bill after bill targeting people like my son for discrimination. Now, they’re back at it.

Yesterday, the Senate advanced a discriminatory “bathroom bill” (SB 3) that would bar Landon from using public facilities like restrooms and lockers rooms, even when he’s at school.

The good news is Equality Texas is fighting back. We’ve been proud supporters of this organization for years. Now, I’m asking you to join me in this fight.

Chip in $7 now and for the next 24 hours only all donations will be doubled—up to $15,000—to support the critical work that Equality Texas is doing to defeat harmful “bathroom bills” like SB 3. 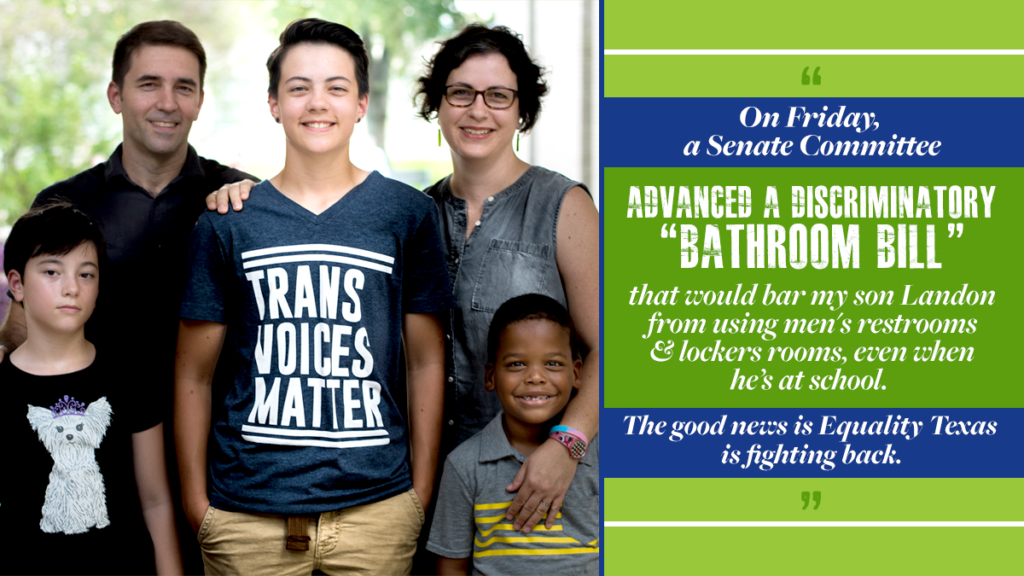 As a parent, my goal is to teach my children. Never did I ever imagine my children would end up teaching me so much.

Landon has taught me about courage, and the fearlessness it takes to live our truest selves. He’s changed my entire outlook on life and how I treat other people. Because of him I’m kinder, more compassionate, and a better person.

That’s why it breaks my heart that some lawmakers are actively trying to make it legal to discriminate against him. If they could just meet him, I feel certain they would feel differently.

Because at the end of the day, we all want the same thing for our kids. We want to know they’re safe, happy and loved. That’s why I’m writing you to speak out against the discriminatory “bathroom bill” being pushed at the State Capitol. And to urge you to support the organizations working to defeat them.

Donate $7 to Equality Texas today to double your impact and ensure they have the resources to defeat “bathroom bills,” keep my son safe, and make sure he has the same shot at happiness.

Your support means the world to me and my family.