One year ago this week, history was made. On February 19, 2015, Sarah Goodfriend and Suzanne  Bryant became the first legally married same-sex couple in Texas history. I had the honor of witnessing their marriage in Austin. It still brings tears to my eyes to watch the video of Suzanne and Sarah’s ceremony outside the Travis County Clerk’s Office. 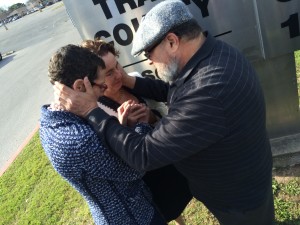 As chairman of the Equality Texas Foundation Board of Directors, I view Sarah and Suzanne’s marriage, not only as a historical and beautiful celebration of love, but also as inspiration. We, at Equality Texas, are inspired more than ever before to lead the fight for full equality for all Texans. Will you join us? 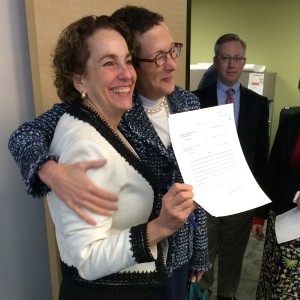 In 11 months, Texas lawmakers return to Austin for the 85th Session of the Texas Legislature. We expect lawmakers from the radical right to file a series of bills to legalize discrimination against LGBT Texans. But we also expect progressive legislators to file a record number of bills that will advance equality in Texas.

I ask you to join us on the frontline, as Equality Texas will work to defeat discriminatory legislation and pass bills that expand equality. I know we will win because most Texans are with us on the right side of history.

While Equality Texas continues our work, I want to this moment to celebrate love and to toast to Sarah and Suzanne’s marriage as a symbol that love triumphs over all.