This post is the first in a series on Texas LGBT history as part of Equality Texas’ observance of LGBT History Month. 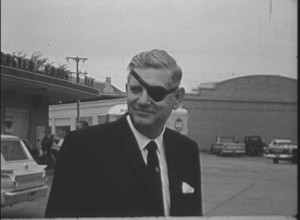 The State of Texas has on four occasions outlawed the freedom to marry. In legislative terms passing redundant laws is sometimes called creating “belt and suspenders.” Four times, however, seems more like a case of belt, suspenders, another pair of suspenders and a cut up extension cord tied around your waist for good measure. While the 2005 anti-marriage constitutional amendment and the 2003 “Texas Defense of Marriage Act” are fairly well known, and most histories of marriage in Texas will at least touch on the 1998 statutory revision, Texas’ first anti-marriage law in 1973 is rarely discussed. The story involves a transgender pioneer, an eye-patch wearing villain and mysterious backdoor legislative shenanigans.

In 1972 Ned Granger, the Travis County Clerk, asked Texas Attorney General, Crawford Martin, whether he was obliged to issue a marriage license for two people of the same sex. This proved quite the head-scratcher for Martin. See, at the time Texas statute didn’t actually require that only “a man and a woman” could be married (and never had). The language in the Texas Family Code, Title I (the part dealing with marriage) was gender neutral.

Martin resolved this by looking at the bill caption of the bill that created the Family Code. Every legislative session there are several thousand bills filed. To make it easier for lawmakers to understand which bill they’re talking about each one is given a caption, a short description of the bill. In the case of the bill that wrote the marriage laws in Texas, Martin noted that the caption was “An Act adopting Title I of the Family Code, a substantive revision of the statutes relating to husband and wife – entering the marriage relationship;…” So, reasoned Martin, even though the law about who could get married didn’t say marriage was “between a man and a woman,” the short description the legislature put on the bill that created the law sort of did. Therefore, the freedom to marry wasn’t legal in Texas.

Martin went on to cite several Texas court cases where the courts had assumed that marriage was between a man and a woman and noted that the US Supreme Court had the previous year refused to hear a similar case out of Minnesota, letting that state’s Supreme Court ruling against the freedom to marry stand.

The matter seemed settled until, three weeks after Martin issued his opinion, Antonio Molina and Billie Ert were married in Houston. 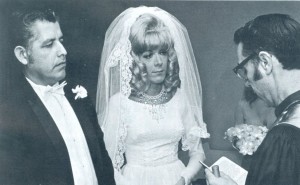 Ert was identified male as birth, but her voter registration card identified her as female. Her contemporaries say she lived her life as woman. Ert and Molina obtained a marriage license in Wharton County, near Houston, using her voter registration card as ID and were later married in a wedding chapel in Houston. Rev. Richard Vincent of the Dallas Metropolitan Community Church (now Cathedral of Hope) presided.

The wedding garnered press attention (reporting it as a wedding between two men) and when Molina and Ert attempted to return their marriage license so the marriage could be registered the county clerk refused.

Attorney General Martin quickly issued an opinion supporting the actions of the clerk in refusing to register the marriage and suggesting Ert could be prosecuted (there’s no evidence that she ever was).

The tizzy over Molina and Ert’s wedding coincided with a massive shift in the state legislature. In response to the Sharpstown scandal (a real estate scheme gone bad that involved many members of the legislature) the way Texas elected some of its representatives changed. Other incumbent lawmakers lost their re-election bids or didn’t run for re-election as a result of the scandal. The result was the largest class of new lawmakers in Texas history and a chaotic legislative session that began just three months after the Molia/Ert nuptials.

In that chaos House Bill 103, a revision to the Family Code, quietly became the newest marriage battleground. While the bill was in committee someone, whose identity has been lost to history, attached an amendment inserting language into the Family Code that marriage was between a “man and a woman.”

The amendment was adopted by the House by a voice vote, so there is no record of any opposition. The House Journal reflects no debate on the measure.

So – very quietly, and with no fanfare – the Texas legislature passed the first anti-marriage law in the history of the state. Contrast that with the lawmakers lining up in 1998, 2003 and 2005 (and 2015) to put their imperator on anti-marriage legislation. Was the idea simply too distasteful in 1973 to warrant public comment? Or was this an intentional effort to quietly pass legislation? There’s no way to know.

The law went into effect on Jan 1, 1974. So the next time someone tries to tell you that “marriage has always been between a man and a woman.” You can tell them “not in Texas law, not before 1974” and then tell them about Crawford Martin, Antonio Molina, Billie Ert and how Texans have been on the front lines of the marriage fight for decades.