Together, we can build a better Texas!

I am Carmen Saenz, a native New Yorker living in Waco, Texas.

In 2012, my friend Susan Duty-Dennard and I hosted Equality Texas’ Daniel Williams at our first Waco Equality Day to lead an Equality Project training. The full day of knowledge exchange, interactive exercises and hands-on practice highlighted the importance of community engagement and building relationships with people who shape public policy,  resulting in Waco coming together as a thriving community of advocates known as Interweave.

You can help bring the Equality Project to more Texas cities and towns by making a year-end gift to Equality Texas. 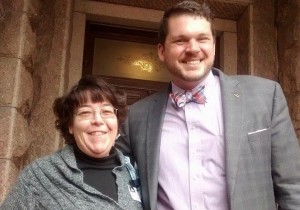 Working with Equality Texas, we plunged into our first initiative in February 2013 asking the Waco Equal Employment Opportunity Commission (EEOC) to add sexual orientation and gender identity to our nondiscrimination policy for city workers. Waco’s EEOC Advisory Committee recommended the changes. However, the City Manager at the time turned it down claiming that no complaints of discrimination had ever been filed by the LGBT community.

With help and a bunch of encouragement from the folks at Equality Texas, we persevered. Together, we continued to advocate for the policy changes and educated the community along the way. On June 3, 2014 Waco’s new City Manager added sexual orientation and gender identity to the Waco employee personnel policy.

Three years after our first meeting, we, and Equality Texas, are still at it. At the local level, we continue to educate the community about LGBT civil rights. We love our collaborative relationship with our friends at Equality Texas. Today, we are working on protections for county workers. If we’re successful, sexual orientation and gender identity protections will be added to the McLennan County Employee Handbook.
There is still work to do here in Waco – and in the more than 100 cities and towns across the state of Texas that could really benefit from the Equality Project to kick-start their local organizing efforts.

I’ve seen how Equality Texas does a great job with their limited resources and know they could do even more if we all invested just a little. Together, we can build a better Texas. Will you join me and make a year-end gift today?

Thank you for supporting the work of Equality Texas!

P.S. We have a full year to reach as many people as possible in advance of the 2017 Legislative Session. Please give as generously as you are able and help bring the Equality Project to a community near you.