Urgent: All Hands On Deck!

If Lt. Governor Dan Patrick and Senator Lois Kolkhorst think we aren’t going to stand up to their horrific attacks on transgender Texans, they’ve got another thing coming.

With only 26 days left to stop their discriminatory bathroom bills before the end of special session, Equality Texas is ramping up our statewide organizing efforts like never before—and we need your help.

We’re organizing urgent phone banks in Austin, Dallas, Houston and San Antonio with one goal: Flood the offices of undecided lawmakers with messages of opposition to these dangerous, anti-transgender bills.

Please, sign up for a phone bank near you today! It’s this kind of grassroots action that will lead us to victory by the end of the special session. 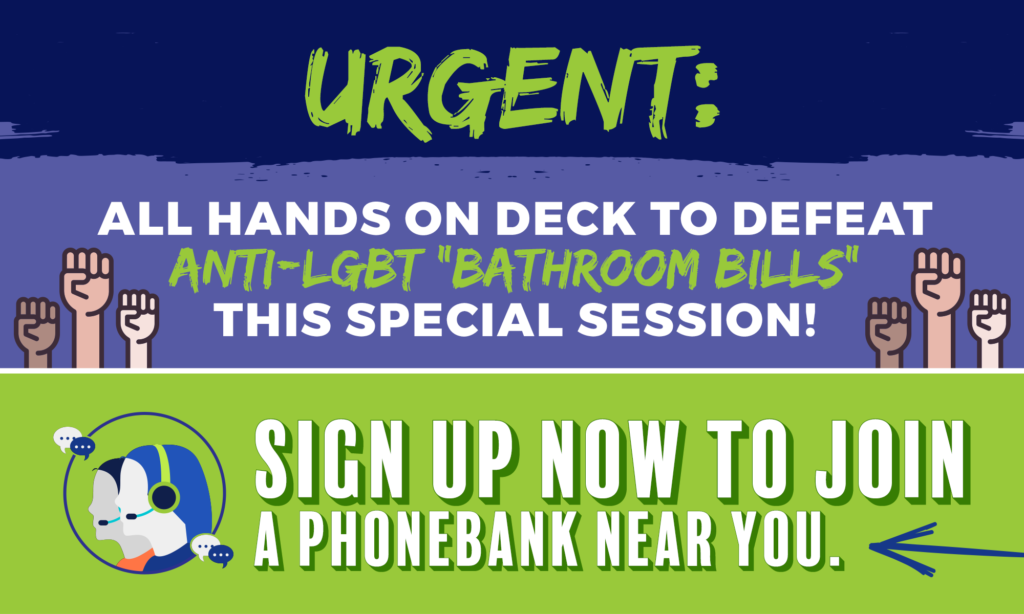 But will phone banking work? The simple answer is yes. Let me explain how:

Right now, Dan Patrick is pulling every trick in the book to force undecided lawmakers to support his dangerous agenda. He wants them to forget that a majority of Texas voters think bathroom bills are a distraction—that most of their constituents want them to focus on real issues that impact their families.

That’s where phone banking comes in. Together, we’ll generate hundreds of phone calls to key lawmakers from people in their district who oppose discrimination—and we’ll make sure they hear the message loud and clear: Texans have had enough.

But if we’re going to make this successful, we need at least 25 volunteers to sign up in the next 24 hours. If you’re committed to stopping bathroom bills, sign up to attend a phone bank near you.

*Never phone banked before? No worries—we’ll be there to offer a full training and support you every step of the way. And even better: We’ll only be calling voters who are supportive and likely to be with us. So sign up now and help us keep discrimination out of Texas!