When I was twelve I put together that I was transgender. I didn’t really know any trans people I could talk to about this self-realization, and I didn’t know what to do. I started to do research on what it meant to be trans. I found a few things, but information was always inaccurate, bigoted, or outdated, so I kept researching. I didn’t know what I was looking for. Other people like me. If there was any way I could make my outer self match my inner self. After months of research I concluded that all I had to do was go to gender therapy for three months, get a letter that said I can go on hormones, then go stealth, meaning not tell anyone I was trans. This was my twelve-year-old self’s plan.

But things weren’t as easy as they seemed to the twelve-year-old me. I never wanted to be trans. I just wanted to be a girl. And who could blame me.  Just look at how transgender people are under attack. Of course, the only way I could become the girl I knew I was, was to embrace being trans and transition.

Eventually, I realized that the act of being trans in itself is revolutionary. I realized that I owed it to my past self and to all the other twelve-year olds who might be where I was to be visible and to tell my story. I realized that being trans is the hardest thing a person can do, and I want to make it easier. I want kids doing research on what it means to be trans to have good things to find. To find others like them. To find the truth.

I have learned so much over the past four years. I know that if you attack one Texan, you attack all Texans. I know from personal experience that it’s not just a slogan. It’s true. If any kids are feeling the way I felt before I came out, then our work is not done. We owe it to all of our fellow Texans to stand up for our brothers, sisters, and other siblings. We owe it to ourselves and to them to be truthful and authentic. If we are visible, we can end the attacks on trans people and make a world where trans kids can grow up happy. 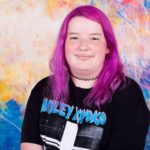 Lily Pando lives in Houston where she serves on Mayor Sylvester Turner’s LGBT Advisory Board.