On World AIDS Day 2017, Equality Texas is sharing an editorial piece from Dr. Jose Luna, Jr., CEO of El Paso’s San Vicente Family Health Center and a member of the El Paso Times editorial board’s community advisory board. As a top 10 state for new HIV diagnosis, Texas must be a part of the equation for getting to zero.  Routine HIV screening is a big part of that blueprint for success.

On December 1 each year, the world comes together to unite in the fight against HIV, show their support for people living with HIV and honor those who have died. Today on World AIDS Day, we Texans need to recognize our piece of the HIV puzzle.

Texas is in the top 10 states with the highest rates of new HIV diagnosis. AIDSVu reports that in 2014, nearly 78,000 people were living with HIV across the state of Texas and in 2015, there were nearly 4,500 new cases of HIV diagnosed.

Texas’ need for large-scale, routine HIV screening is urgent. By making the HIV test part of our standard medical practices, we can begin to identify those living with HIV, and end Texas’ HIV epidemic.

According to the Centers for Disease Control and Prevention (CDC), undetectable HIV means that an individual with the virus can no longer pass it to their partners. This stresses the importance of screening and linking those living with HIV to care, especially given the impact on an individual’s health, as well as the community’s. If we are routinely screening all individuals, we raise our chances of catching their diagnosis early and getting them into care, which then increases their chances of becoming undetectable and untransmittable.

But what is just as important is how routine screening breaks down stigma. Although populations such as the African-American and LGBTQ communities have higher rates of HIV and new diagnoses, that doesn’t mean they are the only ones who should be screened. Rather than target specific populations for an HIV test, implementing routine screening will normalize testing and thus, reduce feelings of shame, horror and isolation.

This year, a gentleman in his mid-forties came into our health center for his annual check-up. At the time of his visit he complained of mild cold symptoms, which had been lingering for several weeks.  He thought nothing of it since millions of people get a cold every year. However, as part of his visit, routine labs were ordered after being seen by his provider. Centro San Vicente’s policy is to include routine HIV screening for all patients if we do not have any confirmation of a test on file.  As a result, this patient was diagnosed with HIV.

As part of our screening policy, we ensure that linkage to care occurs so he was then quickly linked to one of our local infectious diseases specialists and started life-saving treatment. This man had no determined risk factors that would have identified him as needing an HIV test and we would have missed an opportunity to fully care for our patient if we did not have routine HIV screening as our policy. This is one of many examples we’ve encountered and it demonstrates the need for everyone to get tested. Routine HIV screening in a clinical care setting should be the standard of care, not the exception.

With routine screening, more and more patients will think, “If everyone gets a test, why shouldn’t I?”

As a nation we are making strides in the fight against HIV, but to continue to turn the tide and reduce the nearly 50,000 new infections each year, we must start with identifying the undiagnosed. As a top 10 state for new HIV diagnosis, Texas must be a part of the equation for getting to zero.  Routine HIV screening is a big part of that blueprint for success. 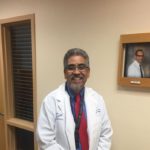