BATHROOM BILL 3.0: A coordinated attack against trans kids and their families.

Opponents of LGBTQ+ rights shift tactics every year, in an attempt to erode Texans’ widespread support for nondiscrimination policy. In 2021, the newest tactics repackage the 2017 “bathroom bill” fiasco to isolate and target transgender youth, putting them under a dangerous microscope.

Anti-LGBTQ+ activists see the rise of public support for equality as a huge threat. From marriage equality in 2015 to a current high of 83% of Americans (70% of Texans) who support LGBTQ+ nondiscrimination, opponents of equality know they’re losing. Their response is to morph their strategy every year, poll-testing which falsified attacks on the LGBTQ+ community will work, and using increasingly dangerous misinformation to create a climate of fear.

This document will outline the progression of coordinated attacks on public support for LGBTQ+ equal rights and freedoms, and share how these dangerous falsities are showing up in the Texas legislature in 2021. We are seeing moves to segregate and ban transgender children from participating in youth sports, efforts to endanger all children to humiliating accusations, and an attempt to criminalize life-saving medical care for transgender adolescents.

Who are transgender Texans?

Transgender people are part of the fabric of Texas, urban and rural. 1 in 150 Texas adults identifies as transgender; 63% are ethnic minorities. Advocates believe that more than 10,000 Texas youth identify as transgender. Despite facing disproportionate discrimination and violence, transgender people are not protected in Texas law from discrimination in employment, housing, or public spaces, nor are they are included in Texas’ hate crimes law. According to a recent study, 75% of transgender youth feel unsafe at school.

The story of anti-LGBTQ+ legislation 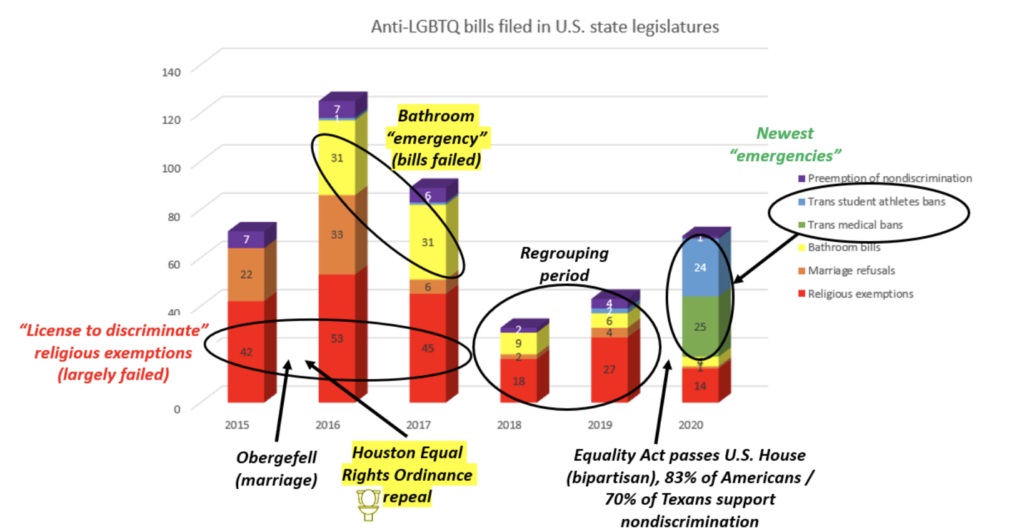 Every year, opponents of equality present the public with a new, fabricated “emergency” related to LGBTQ+ people. These policies are designed to create fear about who LGBTQ+ people are, and to erode the rising support for policies that give LGBTQ+ people the opportunity to participate fully in their communities.

All Kids Deserve a Chance to Play.

Parents, teachers, coaches, and health experts agree: all children benefit from sports. When they play, kids belong; form friendships and make memories; learn life lessons of teamwork, fair play, cooperation, and hard work; and see huge mental and physical health benefits. Barring transgender youth from sports – a tactic that, like bathrooms, has no basis in facts – are another attempt to isolate transgender kids, keeping them from the myriad benefits of playing a sport.

In 2020, lawmakers in 18 states introduced 25 bills to bar transgender kids from sports; this pattern is repeating in 2021. This is a coordinated effort by anti-LGBTQ+ groups, designed to spread fear and misinformation about what it means to be transgender.

Many states already include all kids in sports

More than a dozen states have inclusive sports policies in place, some for nearly a decade, with none of the scare stories promised by lawmakers. These are red and blue states, northern and southern, coastal and midwestern. The International Olympic Committee has successfully had an inclusive policy since 2001.

In 2020, a federal judge granted a preliminary injunction against Idaho’s HB 500, which banned transgender girls from playing sports. Judge David Nye, a Trump appointee, wrote, “plaintiffs are likely to succeed in establishing the Act is unconstitutional.” He noted that the law allows anyone to accuse a girl of being the wrong gender, saying, “being subject to a sex dispute is itself humiliating.”

Debating the lives of transgender youth puts them at risk

In 2017, Trevor Project saw unprecedented spikes in calls from Texas to its LGBTQ+ youth crisis line, which corresponded to every advancement of the bathroom bill. Putting transgender kids under another microscope will expose them to bullying, harassment, and humiliation, and put them at real risk. All kids deserve to play, and these kids deserve better than to be targeted by the state for who they are.

Targeting transgender youth in sports can harm any child

Legislation that empowers anyone to accuse a child of being on the “wrong” team will be harmful to all children – not just transgender children. When anyone can point a finger at a girl and force her to undergo tests to prove her gender, children who don’t fit some people’s expectations of appearance will be exposed to humiliation and bullying, simply for wanting to play.

Some transgender people, including transgender adolescents, rely on medical care as part of their transition. For transgender youth who are insistent, consistent, and persistent about their gender identity, parents/guardians and medical experts work together to provide age-appropriate, evidence-based care. This is a lengthy process, on a continuum of care, personal and private to each family.

In 2020, lawmakers in 18 states introduced 25 bills to criminalize this health care; in 2021 these bills have reappeared in at least 12 states. Some bills would send health professionals to prison for a decade, others would classify doctors and parents as child abusers. None of these bills became law, but the “debates” surrounding them spread dangerous misinformation about who transgender people are and what their health care entails.

Every major medical association supports transition care for transgender people, including thoughtful care for adolescents, as safe, medically necessary, and life-saving. This care is backed by peer-reviewed studies that show that transition care saves lives.

Bills to criminalize transition care rely on the assumption that most people do not know what it entails, or that it is a nuanced process, on a continuum of care, with careful guidelines for treatment of minors.

Medical experts have clear guidelines for care for minors, stating that “decisions about gender affirming care in minors must be made between a physician, patient, and the patient’s parents or guardians…physicians are guided by their ethical duty to act in the best interest of their patients and must tailor recommendations about specific interventions…to each patient’s unique circumstances. Such decisions must be sensitive to the child’s clinical situation, nurture the child’s short and long-term development and balance the need to preserve the child’s opportunity to make important life choices autonomously in the future.” These associations also call the criminalization of the practice of medicine “a dangerous legislative overreach.”

Note: Some anti-LGBTQ+ groups, e.g. American College of Pediatricians, pose falsely as medical associations, and should be rigorously fact-checked.

When transgender adolescents face loss of the care, in its various forms, that affirms who they are, it can have devastating consequences. One South Dakota parent called the bill that advanced there a “hope stealer.” These bills, which isolate transgender youth and remove their opportunities to live fulfilled, healthy lives, are dangerous and cruel. They are also privacy-destroying, as we saw in a 2019 case in Texas in which lawmakers shared the name, photo, and private information of a transgender seven-year-old who was undergoing no medical treatment whatsoever.

It is a dangerous new step in the steady stream of anti-LGBTQ+ policy in Texas to allow non-expert lawmakers to criminalize lifesaving care. These lawmakers are placing their own political goals above evidence-based medicine, above private family decisions, and above care that is proven to save young lives.

Related Bills in the 87th Legislature: