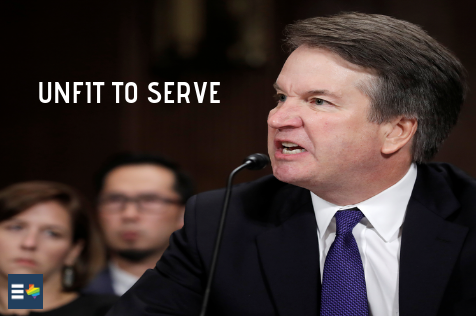 On Thursday, September 27, 2018, Judge Brett Kavanaugh gave untrue and misleading answers to questions posed to him during sworn testimony before the United States Senate Committee on the Judiciary.

The subsequent fact-checking of Judge Kavanaugh’s testimony is NOT a character assassination. It is, in fact, a character revelation.

No matter what the FBI discovers about the sexual assault allegations against him, Judge Kavanaugh’s willingness to mislead the American people  over accusations of underage drinking or sexual innuendo is deeply troubling  because it calls into question his integrity and the potential impact on his reasoning as a Supreme Court Justice.

If we look to any character trait as mandatory in a Supreme Court Justice, it is honestly.
Judge Brett Kavanaugh’s willing dishonesty shows that he is unfit for the office he seeks.

Act Now to Demand Your Senators Vote “NO” on Kavanaugh