Statement from Equality Texas regarding today’s actions by Dan Patrick and Ken Paxton:

The Lt. Governor and Attorney General demonstrated today that they are blinded by transphobia.    Federal education guidelines define the rights of every public school student, including transgender students, and we commend the Fort Worth School District and its superintendent for issuing guidelines which are consistent with federal law.      By fueling hysteria and creating panic where none need exist, the Lt. Governor appeals to the worst chapters of our history, in which discrimination runs rampant and understanding and compassion are absent.    Transgender students, like transgender adults, don’t want to cause any problems;   they simply want to use the bathroom when the need arises.     Ignoring federal law, as the Lt. Governor urges the Fort Worth school district to do, would put at risk significant federal educational funds on which our state depends and would ultimately cause for our state the significant economic chaos now faced by North Carolina.     The demands by the Lt. Governor and the Attorney General that we should ignore federal law are not only dangerous and economically risky, but also demonize transgender students, many of whom are forced to drop out of school because of the constant bullying and aggression they face.     Equality Texas calls upon our state leaders to expend our state’s resources on improving public schools, rather than putting their funding at risk in a cruel and futile attempt to deny equality to all. 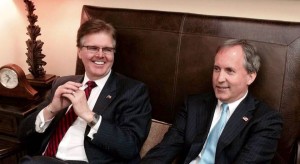 Dan Patrick and Ken Paxton demonstrated today that they are blinded by transphobia.