Today, at the request of Lt. Governor Dan Patrick, Senator Lois Kolkhorst introduced SB6 under the guise of protecting women’s and students’ privacy. In reality, the legislation would hinder transgender people from actively participating in public life by prohibiting them from using restroom facilities that match the gender they live as every day. SB6 would also ban cities, counties, and towns from protecting transgender people from discrimination in accessing bathroom and changing facilities. School districts, state agencies, cities, counties and towns that allow access to facilities based upon gender identity would be subject to fines of up to $10,500 per occurrence. The proposed legislation would also increase criminal penalties for assaultive offenses that occur in restrooms or changing facilities.

While the penalty enhancement provisions of SB6  would seek to address real offenses, the balance of the legislation is an all out attempt to codify discrimination against transgender Texans. Plain and Simple. If legislators were concerned with stopping sexual predators, they should introduce laws aimed at them, not transgender individuals. 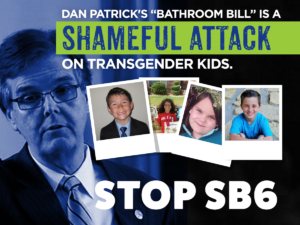 “This unnecessary, unenforceable law would simply function as a tool to target and discriminate against transgender Texans and their families. That is simply unacceptable. As folks get to know transgender Texans, you’ll find that they care about privacy and safety just like everyone else, and simply want to be able to go to school, work, out to dinner, and provide for their families,” said Chuck Smith, Equality Texas CEO.

By fueling hysteria and creating panic where none need exist, Patrick and Kolkhorst appeal to the worst chapters of our history, in which discrimination runs rampant and understanding and compassion are absent. Transgender students, like transgender adults, don’t want to cause any problems; they simply want to use the restroom matching their gender identity when the need arises. The legislation is discriminatory – targeting an already vulnerable and marginalized population – transgender children and adults.

Lt Gov. Dan Patrick and State Sen. Lois Kolkhorst have clearly not learned anything from the debacle in North Carolina and now they are willfully bringing that chaos to Texas. The legislation will damage the Texas economy and the Texas brand – http://KeepTXOpen.org/Study

Over 200 sexual assault and domestic violence organizations have debunked the notion that discrimination protections negatively impact privacy, and agree that transgender people should be able to use restroom and changing facilities that match the gender they live as everyday. Further, hundreds of American cities and towns, including Ft. Worth, Dallas, Austin, and San Antonio have passed nondiscrimination protections that ensure transgender people are able to go about their daily lives and use public facilities the same as everyone else, with no increase in public safety incidents or threat to the well-being of women.

Businesses across the nation have taken action against similarly discriminatory bills in Indiana and North Carolina, costing those states millions of dollars in lost contracts from the likes of the NCAA, SalesForce, PayPal, and many others.