FOR IMMEDIATE RELEASE: Equality Texas to Hold Press Conference on Date of SB 2 Hearing in the House Public Education Committee

TRANSGENDER KIDS AND ADULTS FORCED TO DEFEND THEIR HUMANITY ONCE AGAIN DURING SB2 HOUSE HEARING – CONTINUING THE MOST HORRIFIC AND CRUEL ATTACK ON LGBTQ+ TEXANS EVER.

With more than 60 attempts to limit the liberties and rights of LGBTQ+ people, 2021 will go down in history as the most anti-LGBTQ+ legislative year in Texas history.

Participants will each spend a few minutes speaking about the impact SB 2 (Perry) will have on their lives if passed and the heavy toll of fighting against legislative attacks on transgender youth this session. 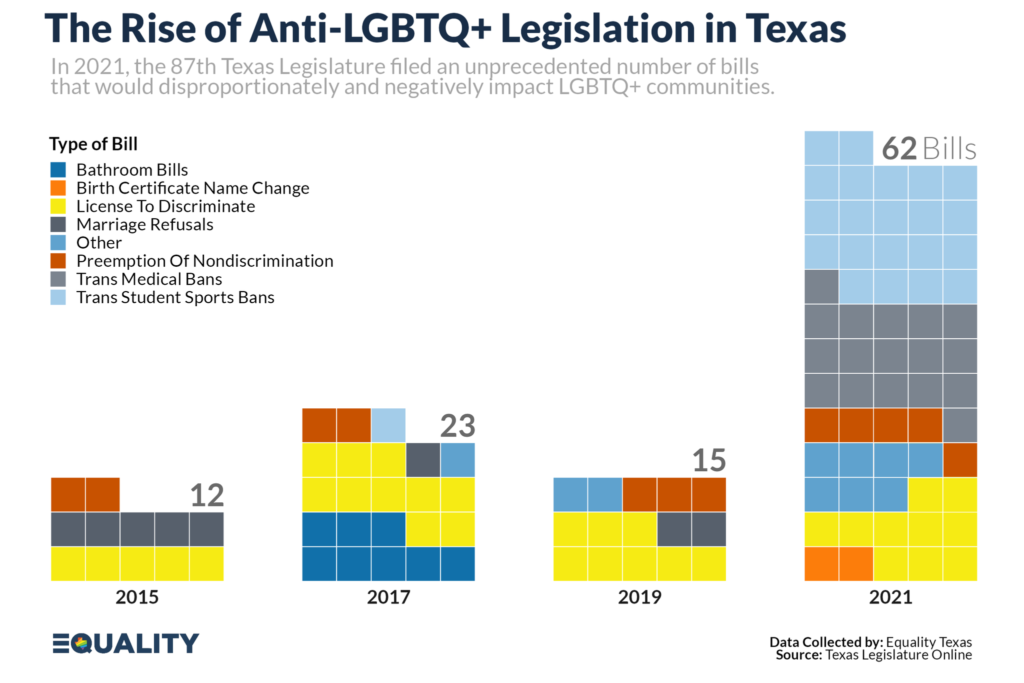 WHERE: Speakers Press Conference Room (2nd Floor off the House Chamber)
Back Up Location: E.2 Capitol Outdoor Rotunda in the Extension

“The rise in the number of anti-LGBTQ+ bills introduced this year in the Texas legislature is truly unprecedented. Within the past decade, legislative sessions have targeted marriage equality, bathroom access, and preemption, but the picture so abhorrently painted by anti-equality legislators in Texas this year is part of a nationally-coordinated effort to attack the humanity of our most vulnerable: transgender children. More than half of the anti-LGBTQ+ legislation in 2021 aims to exclude transgender children from normal school activities and ban their access to life-saving, age-appropriate, and best-practice healthcare. SB 2 would create a permanent ban on the ability of a vulnerable group of kids to participate in public school activities designed to make sure all children are healthy, learning, and included in their school communities. Excluding transgender children from normal school activities fuels a culture of bias that creates school climates and causes mental and emotional harm.”

“The public debate and misinformation spread about LGBTQ+ people, particularly trans people, also exacerbates intolerance. Equality Texas has already seen evidence of this with an increase in requests for help to address escalated anti-LGBTQ+ bullying in schools. The crisis hotline, Transgender Lifeline, also reported a 72% increase in calls from Texas last May — the height of the debate on the sports ban. We have also heard of trans people physically assaulted while shopping and a nonbinary teacher was just asked to resign after parent-led complaints about their use of Mx —  a gender-neutral honorific. It is time for lawmakers to stop tearing kids down just to build up their political profiles. They should halt this pointless bill in its tracks, focus on real leadership, and pass policies that help all Texas families thrive.”