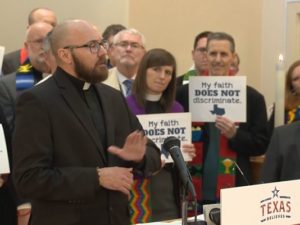 We are encouraged this week by the ever-expanding opposition to Dan Patrick’s discriminatory bathroom access bill SB6. In the last few days, faith leaders from diverse traditions, as well as the NFL have said there is no place for discrimination in the Lone Star State.

Yesterday, an interfaith group of religious leaders from across Texas gathered at Austin’s First United Methodist Church to speak out against SB 6. They delivered a clear message that such legislation is immoral and contrary to the values of love, respect and inclusion shared by people of all faiths. The press conference also marked the relaunch of Texas Believes, a broad coalition of faith leaders who support equality for all Texans, including lesbian, gay, bisexual and transgender Texans. 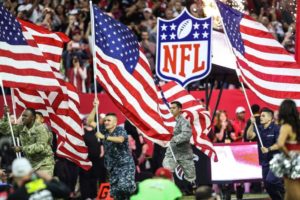 If SB 6 passes, the discriminatory legislation could keep future NFL Super Bowls from Texas. This week NFL spokesman Brian McCarthy said, “If a proposal that is discriminatory or inconsistent with our values were to become law (in Texas), that would certainly be a factor considered when thinking about awarding future events.” Read more of McCarthy’s statement to the Houston Chronicle.

And the bathroom access bill SB6 could even have a disruptive effect on college football in Texas. As of January 1, 2017, California implemented a state travel ban. State-funded, public entities in California are prohibited from traveling to Kansas, Mississippi, North Carolina or Tennessee with the state’s money. Each of the four states have what California has deemed “discriminatory legislation” according to the California Attorney General. This is California’s way to “avoid supporting or financing discrimination” against LGBT people. Check out Jordan Bontke’s story on the potential for a bathroom bill to prevent football teams from California universities from travelling to Texas.

Have a great weekend,