A common scare tactic from backers of disastrous “bathroom bills” is the claim that this legislation protects the privacy of women and girls. But those claims are simply false. The truth is, these bills exist for one reason—targeting transgender Texans for discrimination.

Now, Governor Greg Abbott is admitting as much. 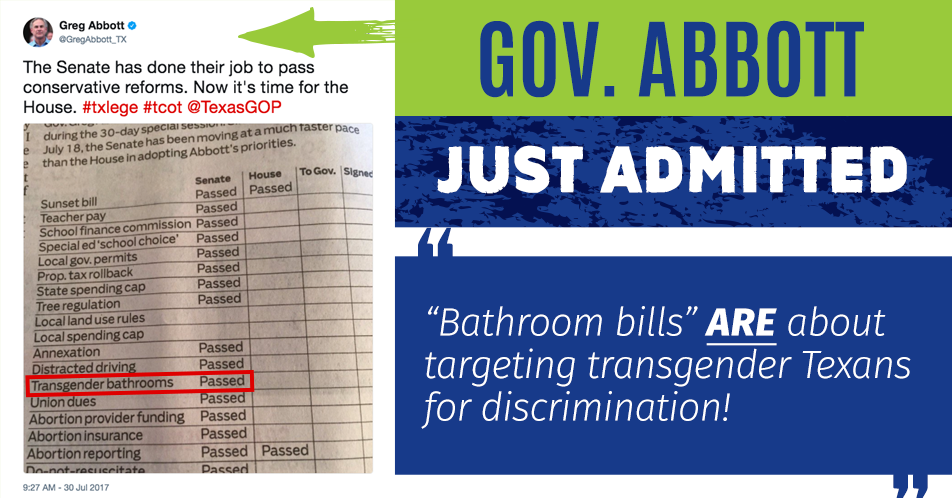 Yesterday, the governor sent a tweet strong-arming the House of Representatives into passing so-called “conservative reforms.” Number 13 on the list: “Transgender bathrooms.”

Enhancing public safety is a bipartisan issue. Why then, does the Governor consider passing a “bathroom bill” to be an effort at “conservative reforms”? The answer is obvious: These bills aren’t about protecting women and girls. They’re not about defending privacy and safety. They’re about making life harder for our transgender neighbors and friends.

Public safety officials and violence-prevention advocates have long known that so-called “bathroom bills” do not make anyone safer, and in fact make transgender people less safe by forcing them to use facilities where they can be singled out and harassed.

These facts are why, everywhere in the country that so-called “bathroom bills” have been introduced, including here in Texas, people who actually care about keeping our communities safe have come out against them.

During the nearly 12 hours of debate on the Senate floor, Sen. Lois Kolkhorst said countless times that her “bathroom bill” isn’t about transgender people at all. But now, the Governor has shown us that she knows, he knows, and all the lawmakers pushing these disastrous bills know the truth:

These bills are a blatant attempt to legalize discrimination against a vulnerable minority.

The House now stands as our last line of defense against these bills—and we have to stop any and every “bathroom bill” here or Governor. Abbott could sign discrimination into law. We have 18 days left in special session and we have to double our efforts to stop these bills.