How many times have we had to say, “we were saddened to learn of the death of a black trans woman . . . ”?  The alarming truth is, there is an epidemic of violence against young trans women of color.  Experts tell us trans women are more than 4 times as likely to be a victim of homicide than their cisgender counterparts, and more than 80% of those killed are women of color.

That makes what is happening in the homicide of San Antonio resident Kenne McFaddenall the more infuriating.  Despite having a confession from the man accused of her homicide, prosecutors have managed the case so poorly that he now cannot be tried for the crime.  According to news reports, despite having obtained a criminal indictment, prosecutors chose to present their case to a judge in a failed effort to have the accused’s parole revoked.  Having presented the case once, prosecutors are now precluded by the Constitution’s double jeopardy clause from taking the homicide case to trial.

The shocking bungling of the case is a terrible blow to the people who loved Kenne. Would District Attorney Nico LaHood have let this happen if the victim weren’t a trans woman of color?

Tell Bexar County District Attorney Nico LaHood that we expect him to take seriously the epidemic of violence against trans people.  It’s his job to protect us. We demand justice for Kenne, and for all our transgender sisters.

Kenne’s accused killer will never be tried. District Attorney LaHood needs to tell us what he is doing to ensure this never happens again. 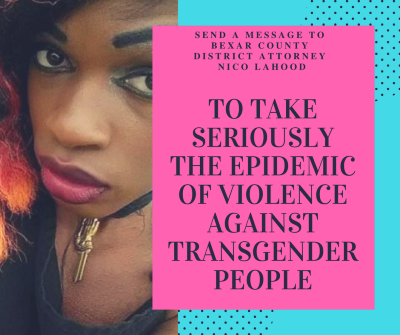