Last Tuesday as the clock struck midnight, all 30+ anti-LGBTQ+ bills filed this session were officially dead, including 13 direct attacks on transgender youth. It’s been a long, hard road to get here and we absolutely could not have done it without you, our partner organizations or our LGBTQ+ champions in the Texas House. THANK YOU to everyone who contacted your legislators, attended an event, testified and shared your story publicly, or educated your friends and family privately.

Of course as we’ve mentioned before, nothing is over until Sine Die (the last day of session). Sine Die is this coming Monday and in the near term we’re watching all amendments closely to ensure that anti-LGBTQ+ bills aren’t revived. 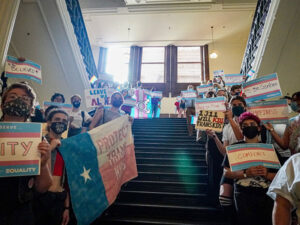 Photo taken by Geoff Carlisle at Equality Texas demonstration on Sunday May 23, 2021.

We’re also watching for indications on whether our fight will continue through a special session. As it stands, there will be a special session in the fall to handle redistricting and the disbursement of federal COVID relief funds only. The Governor alone has the power to call a special session, and the bills considered must be limited to the items that the Governor puts on his “call,” or the announcement kicking off the special session.

Despite the recent exchanges between the Governor and Lt. Governor, it’s unlikely at this time that there will be a special session in June to bring back SB 29 (Perry), the ban on transgender youth playing sports. Make sure you’re following us on social media so we can keep you updated if anything develops. If you would like to commit to taking action should there be a special session please, sign up here.

The last time there was a special session attacking transgender Texans (for the “bathroom bill”), it cost taxpayers over 1 million dollars and the bill still failed to pass — because hate is not a Texas value.

70% of the state supports nondiscrimination protections for transgender Texans. The attacks on transgender youth that dominated this session are not reflective of our state and should never have moved as far through the legislative process as they did. These bills relied on misinformation and lies to gain momentum and caused untold damage through the rhetoric they promoted.

Change is made through speaking truth to power. We’re incredibly proud of our community and allied legislators for defeating the overwhelming attack on transgender Texans. We’ll continue to work to educate those in power and demand that they acknowledge the truth: that transgender Texans are not political pawns. They are an integral part of the fabric of this state and deserve to be treated with dignity and respect. Join us.