Legislative Session Wrap-Up: Our community mobilized with strength and heart

The 87th regular session of the Texas legislature is officially over, and with your help, we were able to fend off an unprecedented attack on LGBTQ+ Texans including bills that would ban life-saving, best practice healthcare for transgender youth and bills that would categorically exclude transgender youth from playing sports. These were nationally coordinated attacks that swept through the nation in order to peel back support for the LGBTQ+ community as a whole.

While we’re holding our breath to see if Governor Abbott adds anti-transgender legislation to a special session, we can reflect on the key takeaways of this session.

Our Community is Powerful 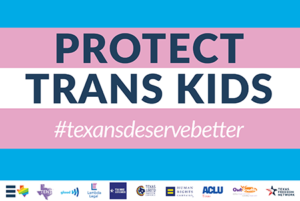 This session we faced almost insurmountable odds but our community partners joined together virtually and in-person to create real power that held back an overwhelming attack on our rights. Visible public pressure is a core pillar of legislative strategy, and LGBTQ+ Texans and their families delivered in Texas-sized fashion.

The landscape in the Texas legislature is tough. Over 30 anti-LGBTQ+ bills were filed this legislative session. Half of the legislators who filed anti-LGBTQ+ bills were committee chairs, a powerful position in the legislature. Lt. Governor Dan Patrick, who presides over the Senate chamber, is well known for his animosity towards the LGBTQ+ community.

In spite of these facts, our community mobilized with strength, fiercely protecting our most marginalized transgender youth. But we know that even debating these bills causes harm. Until the balance of power shifts inside the Capitol dome, attacks on our community will continue. We now have the opportunity to carry this momentum forward from the regular session to a possible special and beyond to elections to ensure that we never have a session like this again.

Donate to our Special Session Fund to help us hold the line against anti-LGBTQ+ bills.

The primary talking points of anti-trans bill supporters were all fabricated fear-mongering. This isn’t a new tactic, anti-LGBTQ+ groups have been painting the community as a threat since Stonewall and long before. This session, with the focus on transgender youth, the lies used to support anti-trans legislation pointed to imaginary girls with lost scholarships and healthcare scenarios that didn’t exist.

70% of Texans support nondiscrimination protections for the LGBTQ+ community. This majority support exists because our education and visibility have left no room for lies about who LGBTQ+ Texans are. The more we educate lawmakers during session, the less room there is for manipulation, fear, and lies. We’ll spend the next few months, in collaboration with our partners, ramping up education efforts so that Texas lawmakers and voters alike understand the facts about sports participation bans and bans on best-practice transition healthcare and that these attacks are just new ways to express the same hate towards the LGBTQ+ community.

Throughout the session, champion legislators pushed back vocally against anti-LGBTQ+ rhetoric. Every session, the more champion members speak up the lower the tolerance in places of power for attacks on the LGBTQ+ community. There were some poignant moments in hearings this session where lawmakers spoke out and stood for what was right. And we will never forget the powerful visual of legislators waving transgender flags on the floor of the House as the clock struck midnight, killing SB 29, the transgender sports ban. Keep an eye out for our moments of pride this month for a recap of these passionate scenes.

Session By the Numbers

Some highlights of our advocacy work this year:

Legislative sessions are not the end of our advocacy, but the moment of truth where we apply the power we’ve built in the interim. This session we sent the important message that we have the strength to withstand an all out assault. Join us in the interim as we continue to build and change the dynamic in the Capitol for a special session and beyond.