No, this isn’t an error. We aren’t accidentally reposting an old message. Our community is being attacked once again. And the need for your involvement is urgent.

This afternoon, Governor Abbott announced a third special legislative session and included anti-trans legislation to try to deny trans youth the chance to play sports in his short list of priorities.

If you’ve followed #txlege in 2021, this is not unexpected. What it is, is cruel. Horrific. Exhausting. A relentless fictitious monologue perpetuated by elected officials, riddled with intentional misinformation, portraying trans children as dangerous to dehumanize them and make it easier to convince Texans that it’s ok to exclude trans kids from normal school activities.

Twenty times Equality Texas has mobilized witnesses and submitted testimony against just this legislation and at times, it feels like we’re not being heard. But I’m asking you to invest in Equality Texas once again while there is still hope to defeat this bill.. Thanks to your partnership and advocacy, and with our community partners, we have been successful at preventing discriminatory anti-LGBTQ bills from becoming law. Your voices were heard through calls, emails, and rallies at the Capitol — so much so that our community held the line against 60+ anti-LGBTQ+ legislative attacks. We can do it again.

It’s difficult to feel hopeful right now, especially when Texas politics have dominated national news this past week. But I urge you to find a second — or third — wind, as there is still an opportunity to have a say in the daily lives of Texan children.

It seems impossible to keep fighting when we wake up to news that historically accurate education (what opponents refer to as Critical Race Theory) is all-but-banned in schools, abortion rights are essentially gone, and the simple right of an opportunity to vote has been needlessly complicated for millions of Texans.

But we have this moment — 30 days beginning September 20th — to positively impact the rights of transgender children in Texas. Here’s what you can do: 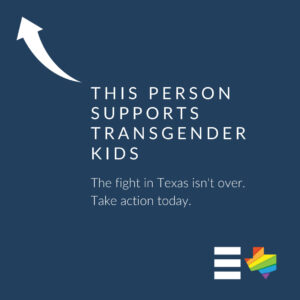