Before the 3rd Special Session of the Lege gavels in, you can help.

Earlier this week we shared that Governor Abbott added anti-transgender youth legislation to a third special session set to start September 20th. As one of only five items to be considered over the 30 days, we will have to pull out all the stops yet again to ensure that this legislation doesn’t pass.

Call the Speaker of the House, Representative Dade Phelan today at (512) 463-1000 and tell him not to allow anti-transgender legislation on the floor.

Over the course of all three special sessions the Governor has asked legislators to pass legislation that would exclude transgender youth from normal school activities, in this case K-12 sports. No child deserves to be excluded from their peers. It’s especially out-of-touch to debate who is allowed to play sports while schools across the state are shutting down everything — including school sports — to cope with the spike in COVID-19 cases.

If schools aren’t even offering sports, why does the Governor keep bringing this issue back? Because it’s not about sports. This is a concentrated campaign to dehumanize and ostracize transgender youth in exchange for a few votes in a Republican primary.

Anti-LGBTQ+ activists are already calling Speaker Phelan to ask him to push for bills that would ban affirming healthcare for transgender youth. Take two-minutes today to call the Speaker at (512) 463-1000 and remind him that 70% of all Texans support equality for the LGBTQ community and urge him not to move any anti-transgender bills this special session.

DANGER EXTENDS BEYOND THE LEGE

These existential attacks are right in line with the Governor’s recent actions beyond the legislative session.

Last month you may remember that Governor Abbott purposely mischaracterized affirming, life-saving healthcare for transgender youth when he asked the Department of Family Protective Services to weigh in on what procedures could be considered child abuse. Not only did he perpetuate dangerous misinformation about gender affirming healthcare, he opened the door for politicians without medical expertise or knowledge of the transgender community to determine what’s best for transgender kids.

On September 1st, the Governor took down a government website providing suicide resources for LGBTQ+ foster kids — during Suicide Awareness Month — after being accused by a political rival of promoting “transgender ideology.” The only “ideology” promoted by the website was that transgender kids exist and are worthy of help. 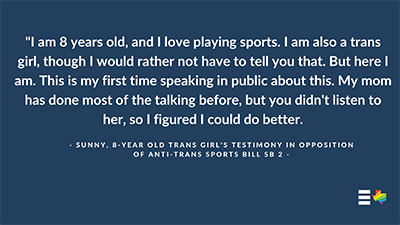 Call Speaker Phelan today at (512) 463-1000. Urge him not to move any anti-transgender bills to the floor so that these kids don’t have to.