Special Session 3 Week 2 Wrap-up: 263 days have passed since the first day of the 87th Legislative Session — more than double expected

This week three anti-transgender sports bans were referred to House committees, moving one step closer to becoming law. Although the three bills, SB 3, HB 10, and HB 25 are nearly identical, they were referred to two separate committees: the Public Education committee and the Constitutional Rights and Remedies committee. The next step for these bills is for the chair to set a public hearing, generally with only 24 hours notice.

The hearing will likely be the last chance for the general public to voice opposition to the bills. Our goal is to drive more people to the hearing than ever before, overwhelming lawmakers with the truth: that Texans do not support the constant targeting of transgender kids.

Commit to taking action for the House anti-transgender sports ban hearing. Sign up here to be the first notified when a hearing is set.

The longer this debate continues, the more lies about who transgender people are saturate this state. Anti-transgender sports bans push the lie that transgender kids are a “threat” that cisgender kids must be protected from, directly fanning the flames of transphobia in our state, and terrifying trans Texans who are just trying to live their lives.

We’re seeing the consequences. The Trevor Project, an LGBTQ+ hotline, recently reported that calls from Texas youth are up 150% compared to 2020 and that “transgender and nonbinary youth in Texas directly stated that they are feeling stressed, using self-harm, and considering suicide due to anti-LGBTQ laws being debated in their state.”

Let trans youth in Texas know that you support them by participating in the House hearing. Sign up here to commit to advocacy on what will be one of the most important hearing dates this year in LGBTQ+ rights in Texas. Whether you have 10 minutes or a few hours, you can do so much! Drop a card to formally enter your opposition against the bill, testify, make office visits, or simply rally to make noise and cheer on testifiers on their way to deliver testimony.

Despite the relentless attacks on the LGBTQ+ community in the Capitol this year, youth in Texas are showing us a brighter future. Last week, students in Irving’s MacArthur High School staged a walkout after LGBTQ+ safe space stickers were removed from campus, and this week students at Temple High School walked out in solidarity with their transgender classmate after she was denied the use of the girl’s restroom.

These kids are courageously embodying leadership, empathy, and love by wielding their power to support their LGBTQ+ classmates. They are directly combatting homophobia and transphobia on the ground — from adults — and demanding change in their communities.

This year has been particularly brutal — with more than 70 bills targeting the LGBTQ+ community as a whole, 50+ of those bills directly focused on transgender kids, and multiple laws enacted that curtail our the rights and safety of all Texans. But these kids in Irving and in Temple have shown what happens when we band together, push back, and keep fighting.

Keep fighting with us as we continue to show legislators the strength, persistence, and determination of our community. If you can’t attend hearings in-person, remember you can submit written testimony, call your legislators, and register formal positions for the public record. Everything makes a difference, and only together can we hold the line against every anti-LGBTQ+ measure legislators throw at us. 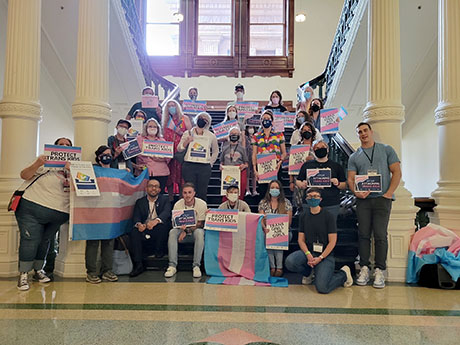