Statement by Steven M. Rudner, Chairman of the Board, Equality Texas

Statement by Steven M. Rudner, Chairman of the Board, Equality Texas in response to Lt. Governor and the Ft. Worth ISD.

The Lt. Governor loves to stir up hatred for political purposes, but his hatred comes at a high cost. For transgender students who are bullied every day, his hatred is a mean-spirited attack on their value as human beings. For the state, it puts at risk over six billion dollars in annual federal school funding. The Lt Governor should get out of people’s bathrooms, and he should get out of school board meetings where he doesn’t belong, and he should pay some attention to the state’s real problems, like school funding and our broken foster care system.

Picking on children is a new low, even for our Lt Governor.

School districts throughout the state have experienced crisis after crisis.   When school districts have dealt with funding crises, failing test scores, scandals with administrators cheating on test scores, buildings falling, and other issues, the Lt Governor is nowhere to be seen. It is sad and inhumane that only the chance to pick on transgender children, who simply want to use the bathroom in peace, gets his attention.

A Lt. Governor, who preaches about local control, should respect the decision of the Fort Worth Independent School District, and cities like Rockwall, where no one is interested in the brand of hate the Lt. Governor is selling.

The policy about which we are here today is not a new policy. It was adopted years ago; the Superintendent has merely drafted regulations implementing a longstanding policy. The only news here is that the Lt Governor has decided to pick on transgender kids, to gain political points.

Equality Texas commends the Ft Worth Independent School District for issuing guidelines which are consistent with federal law.   By fueling hysteria and creating panic where none need exist, the Lt. Governor appeals to the worst chapters of our history, in which discrimination runs rampant and understanding, and compassion is absent.    Transgender students, like transgender adults, don’t want to cause any problems.  They simply want to use the bathroom when the need arises.  The Lt. Governor’s proposal would cause Texas to violate federal law, as defined by the 4th Circuit, and put our school funding at risk. It would ultimately cause for our state the economic chaos being sustained by North Carolina. The Lt Governor’s demands that we should violate federal law are not only dangerous and economically risky but also demonize transgender students, many of whom are forced to drop out of school because of the constant bullying and aggression they face.     Equality Texas calls upon our state leaders to expand our state’s resources on improving public schools, rather than putting their funding at risk in a cruel and futile attempt to deny equality to all. 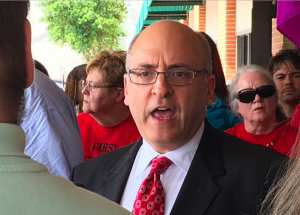 Steve Rudner, Chairman of the Board, Equality Texas