The 5 Texas State House Races for LGBTQ Advocates to Watch

While all eyes are on the Presidential race and the federal ticket, Texans know better than most that what happens down-ballot is just as important. Since at least 2015, LGBTQ Texans have shown incredible resilience in the face of a targeted, anti-LGBTQ agenda. Equality opponents have tried everything from direct attacks on transgender Texans in the multiple failed “bathroom bills” to legally carving out a license to discriminate with religious refusals and preemption of local nondiscrimination laws. Every time, our community has banded together and exposed these laws for what they are – increasingly frantic attempts to roll back progress towards equality and instill fear. Each one of these laws has a profound human impact and, in a state where 70% of Texans support LGBTQ protections, they’re not just anti-LGBTQ, they’re anti-Texan.

But what if we could put a stop to the bills before the legislative session even starts? No matter how many people sign onto a bill, each piece of legislation only has one primary author, one person passionate enough about discrimination to ask their fellow legislators to write it into law. If we can keep some of those bad bill authors from ever reaching the legislature, then we can work less on defense and more on bills that move us towards full and lived equality under the law.

This November we have that chance. Below are five races we’re watching where we can flip the script – ousting supporters and authors of anti-LGBTQ bills and electing pro-equality candidates in their stead. All of these races have incredibly slim margins – under 10% – and have the potential to change the way we do pro-equality work in Texas.

Matt Krause is a prolific author of anti-LGBTQ legislation. He has served 4 terms in the legislature and has authored or co-authored 18 anti-LGBTQ bills. Last session he authored the “Chick-fil-A” bill, which in its original draft was the most sweeping religious refusal bill filed in the 2019 session, providing a license to discriminate to officials in every level of government. Most recently he pledged that he would file a bill to criminalize best practice medical care for transgender youth, spreading misinformation about transition-related care while invasively sharing a minor child’s name on the internet. 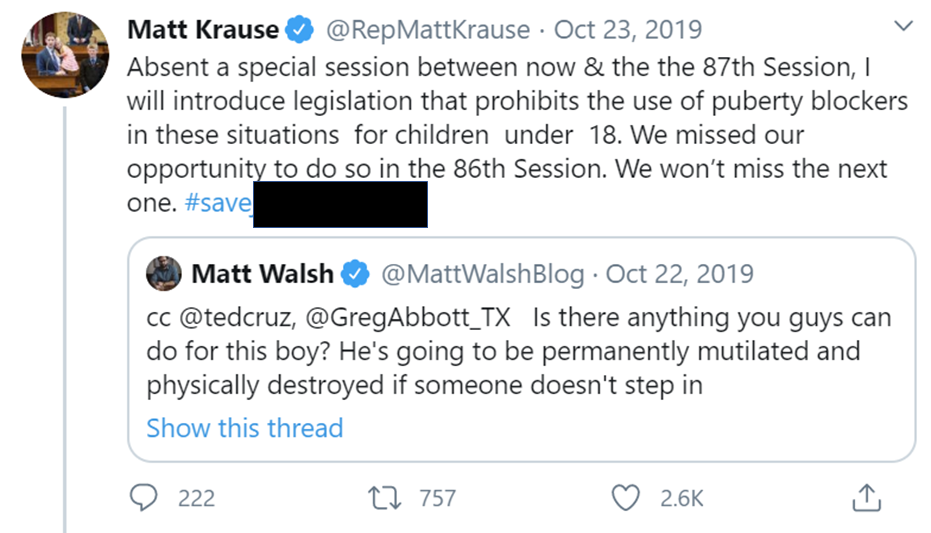 In contrast, Lydia Bean has committed to pro-equality stances and personally founded a nonprofit that brings faith communities together to work for justice and fairness. In 2018, Krause won District 93 seat with less than 8% of the vote. Flipping this seat to a pro-equality candidate would have an incredible impact on the political appetite for anti-LGBTQ legislation in the Texas House.

Jeff Leach supported the bathroom bill in 2017 and co-authored two other anti-LGBTQ bills in 2019. Despite telling the Dallas Morning News that he would make “different choices next time” on LGBTQ issues, he has already pledged to file more anti-LGBT legislation in the next session, specifically a bill similar to Krause’s ban on best practice medical care for transgender youth.

Lorenzo Sanchez is a pro-equality candidate and first-generation Mexican American, raised by a single mother in the district. If elected, he will be the only openly LGBTQ+ man in the Texas Legislature. In 2018, Leach won his seat by just over 2% of the vote: 1,650 individual votes.

In 2017, Matt Shaheen filed one of the two “bathroom bills” in the House and followed up in 2019 by co-authoring two more anti-LGBTQ bills.

Sharon Hirsch is running for the second time against Matt Shaheen in one of last cycle’s closest House races. She supports legislation banning discrimination based on sexual orientation and gender identity or expression in housing, employment, and public accommodations and conversion therapy. She only lost by 391 votes. That’s less than 1%. Sharon has dedicated her life to public service and public education and is pro-equality.

House District 92 was previously held by Johnathon Stickland, a bombastic anti-LGBTQ state representative who retired. Stickland co-authored three anti-LGBTQ bills last session and was an ardent supporter of 2017’s “bathroom bill.” Stickland got his start in the Texas House with a great deal of support from Empower Texans, an anti-LGBTQ organization. Empower Texans is also supporting the Republican primary winner for this seat, Jeff Cason. On LGBTQ issues, Cason stated in a public questionnaire that he was against LGBTQ inclusive nondiscrimination laws, against transgender youth participating in sports according to their gender, and against the “promotion of the LGBT agenda in public schools.”

Jeff Whitfield is a military veteran who served in the Air Force and has committed his life to public service. He has committed to pro-equality stances and is against any sort of exclusionary policies that would discriminate on the basis of sexual orientation or gender identity. In 2018, Stickland only won the seat by 2.4%, around 1,500 votes.

Like Jeff Cason, Lacey Hull has openly indicated her opposition to pro-equality measures. In a public questionnaire she too stated that she was against LGBTQ inclusive nondiscrimination laws, against transgender youth participating in sports according to their gender, and against the “promotion of the LGBT agenda in public schools.”

Akilah believes every Texan, including LGBTQ people, should benefit from the work of the government. She supports legislation banning discrimination based on sexual orientation and gender identity or expression in housing, employment, and public accommodations and conversion therapy. Bacy is an attorney who operates her own firm, specializing in probate, employment discrimination, and criminal defense. In 2018, the former incumbent won his seat by only 72 votes, or 0.2%.

Equality Texas is doing our part to help flip the House to a pro-equality majority, starting with these five crucial races. Sign up for one of our phone banks today, mark important election dates on your calendar, gear up for early voting, and help us make history in November.

Equality Texas, a 501(c)4 political advocacy organization, serves as the largest nonpartisan organization working for the elimination of discrimination targeting the LGTBQ community.