Trump Approves New Limits on Transgender Troops in the Military 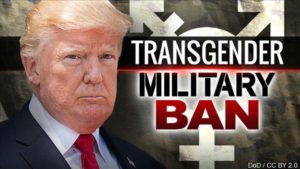 Transgender troops who are currently in the United States military may remain in the ranks, the White House said March 23, but the Pentagon could require them to serve according to their gender at birth.

The policy recommendation that President Trump approved flatly states that “transgender persons who require or have undergone gender transition are disqualified from military service.” It also gives the Pentagon the ability to make exceptions where it sees fit.

According to a Pentagon memo about the policy, exceptions to the ban include people who have been “stable for 36 consecutive months in their biological sex prior to accession,” servicemembers who “do not require a change of gender” and troops who started serving under the Obama administration’s policy prior to the new memo.

After Trump initially tweeted his announcement of a ban in July 2017, transgender troops took the policy to court, which halted its implementation. In a ruling on December 11, 2017, U.S. District Judge Colleen Kollar-Kotelly in Washington refused to lift part of her Oct. 30 order stopping the Trump ban from taking effect until the case is resolved, saying it likely violated the U.S. Constitution’s guarantees of due process and equal protection under the law.

The continued actions of the Trump administration represent transphobia disguised as policy, pure and simple. There is no evidence to support any policy that bars from military service patriotic Americans who are medically fit and able to deploy.