Celebrate our birthdays and double your gift

Help us celebrate by making a gift to Equality Texas Foundation! When you do, your gift will be matched by a generous foundation and will go twice as far! 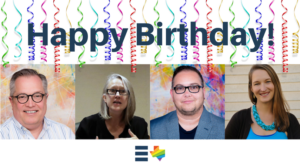 Amber Briggle, fierce Mama Bear, advocate, and incredible Equality Texas supporter, has donated her birthday to Equality Texas Foundation, too. She has already raised over $1,000 for our programs! If you would like to help in her campaign, you can donate HERE.

Your support of Equality Texas Foundation is a great gift to our team and also supports our public education and engagement programs.

The TransVisible Project reduces prejudice against transgender Texans by identifying transgender leaders and communicating their powerful stories of resilience.

Keep Texas Open for Business is a coalition of small business owners committed to making our state welcoming to all.

Our Safe Schools project is premised on the belief that LGBTQ kids are perfect just the way they are and advocates for their right to be themselves at school without fear of discrimination or bullying.

The Equality Project mobilizes LGBTQ Texans and their allies to advocate for change in their communities and at the State Capitol.

TransForward is a collaboration with the Texas Health Institute to ensure access to culturally competent healthcare.

Help celebrate our outstanding leaders, and support our work!

Masterpiece: It’s not about the cake

Later this summer, the U.S. Supreme Court is expected to rule in Masterpiece Cakeshop v. Colorado Civil Rights Commission, a case that is likely to ignite a firestorm here in Texas, no matter the outcome.

The case arose in 2012, when Dave Mullins and Charlie Craig tried to buy a cake for their wedding reception from the Masterpiece Cakeshop in Denver, but were turned away by the shop owner because they are gay. Mullins and Craig notified the Colorado Civil Rights Commission, which investigated and found that Masterpiece had violated a Colorado law that bars businesses from denying service to customers on the basis of personal characteristics like race, sex, or sexual orientation. The Commission ruled that Masterpiece need not sell wedding cakes at all, but if it chooses to do so, must sell cakes to any customer who wants one. The shop owner has appealed that ruling all the way to the Supreme Court, arguing that he should be exempt from state civil rights laws because of his personal religious beliefs about homosexuality.

So why all the fuss over a cake?  The transaction that gave rise to the case may have involved a simple cake, but the case is about something much bigger.

The Masterpiece case is part of a coordinated strategy to roll back rights that LGBTQ people have spent decades fighting to achieve.  Masterpiece is represented in the case by Alliance Defending Freedom, a legal organization designated as a hate group by the Southern Poverty Law Center for extremist anti-LGBTQ rhetoric and advocacy. ADF and its ilk have devised a cynical strategy to use religion as a justification for discrimination.  In this case, ADF is asking the Supreme Court to create a constitutional right to discriminate under the First Amendment, giving some people the right to ignore laws meant to protect everyone.  So much for “love thy neighbor,” huh?

If the opponents of equality have their way, such a license to discriminate could have consequences in many contexts beyond wedding-related services.  In a system where personal religious beliefs trump the law, the LGBTQ community will be targeted in every facet of our lives:

Nor are these harms limited to the LGBTQ community. A license to discriminate against the LGBTQ community opens the door for service refusals against people of color, against women, against people of different faiths.  We long ago rejected this kind of discrimination in our country, because using religion to divide people is the antithesis of what we hold dear in America.

Texas is at the epicenter of these attacks in the guise of religion. Just last year, the Texas Legislature passed a law that permits state-funded foster and adoption agencies to discriminate against LGBTQ people, including the kids they’re meant to serve. And the Masterpiece case is likely to spawn a whole new round of bills aimed at creating a license to discriminate against the LGBTQ community.

All of us value the freedom to worship according to our own beliefs, and that’s why religious liberty is enshrined in the First Amendment. But religious liberty doesn’t give anyone the right to discriminate against us for being who we are.

At Equality Texas, we have no intention of letting our hard-won rights be stripped away.  No matter the outcome in Masterpiece, we’re ready to defend the LGBTQ community from assaults in the guise of religion.

Help us fight back.

Sign the pledge to join us in the fight.

Donate today to support our work.

I didn’t expect to come out. As a mother of three with a fantastic husband, coming out wasn’t in the cards. And then, I had to. So did my husband. My whole family, actually. We all came out. We had to for my oldest daughter. We came out as an inclusive family.

What it feels like to be transgender is to be yourself in your own unique way. That’s how my daughter puts it, and I cannot be more proud of her for the simple act of being herself. It isn’t easy, although it really should be.

Equality Texas works very hard to make it easier for LGBTQ Texans to be themselves, live their authentic lives, and have full equality in hearts, minds, and all aspects of the law.

This should be easy, and I want to build a state where it is. I want parents to know that being an inclusive family is the only option and help them be supportive. I want schools to know that it is their job to be inclusive and help them to do it. I want businesses to know that inclusivity is great for growth and teach them how. I want my children to grow up comfortable and confident in themselves and enter an adult world totally free to be themselves.

I want that for you, too. Join us, and help us.

As the parent of a trans youth, I know all too well how overwhelming it can be to be your child’s best advocate in the state of Texas. It is simply too much to take on alone at times. Families across the state desperately need continued support. As a mama bear, I ask you to please consider giving the gift of equality this holiday season. Your generosity will be deeply appreciated by many.

You can support the work of Equality Texas Foundation with a tax-deductible gift right now. A generous foundation is matching gifts through the end of the year, up to $70,000, so your gift goes twice as far.

PS You can also support our political advocacy by contributing HERE or by getting your Merry Merry Martini Mixer or Love Equality Tickets!

We have an opportunity to reaffirm our collective purpose to create a state that reflects our values and priorities. We achieve transformational social change by coming together, and we must continue to fight for the state we want. That means speaking out and working against racism, white supremacy, xenophobia, sexism, misogyny, ableism, homophobia, biphobia, transphobia and any other forms of oppression that impact so many.

Are you willing to help us stop the rollback of progress we have made in the past few years?

Civic education and engagement will be crucial to our success in 2018 and beyond. Educating, motivating, and activating the LGBTQ community and our allies in this next year is required for us to advance a proactive agenda for equal treatment. Help us, and together, we will build a state of equality in Texas.

A generous foundation is matching gifts through the end of the year, up to $70,000, so your gift goes twice as far. You can support the work of Equality Texas Foundation with a tax-deductible gift right now!

With your help, and the help of other fair-minded Texans, we will achieve our vision of a state where all Texans are treated equally with dignity and respect.

PS You can also support our political advocacy by contributing HERE or by getting your Merry Merry Martini Mixer or Love Equality Tickets!

There are many ways to voice your opposition to SB 3 and SB 91.

The Day of Committee Hearing

Thank you for contributing to the fight for equality for all Texans. Please don’t forget to use #YallMeansAll when posting to Facebook, Twitter, or any other social media app!

The House of Representatives Committee on State Affairs will hear witness testimony on the Committee Substitute to HB 2899 (CSHB 2899), a proposed House alternative to the SB6 bathroom bill, on Wednesday, April 19th, starting in the afternoon in the John H. Reagan Office Building Room JHR 140 in the Capitol complex.

To be clear, this bill being promoted as an alternative to SB 6 by Texas lawmakers is unacceptable. CSHB 2899 is discriminatory and will leave thousands of transgender Texans without protections and vulnerable to harassment and violence.

There are many ways to voice your opposition to CSHB 2899.  The important ways are through social media, registering your opposition to the bill, calling your representative, and testifying at the public hearing. For social media, we ask throughout the day that you use #StopHB2899 and #YallMeansAll when posting to Facebook, Twitter, or any other social media app in order to create more advocacy noise. You can find who represents you and how to reach them HERE. The hearing is anticipated to be late in the afternoon and could last into the evening. If you can make it to the Capitol but cannot stay late, we strongly encourage you to register your opposition to CSHB 2899. Public testimony requires registration, as well. Please read these instructions for more information:

Before Registering to Testify Against CSHB 2899

The Day of Committee Hearing

Thank you for contributing to the fight for equality for all Texans. Please don’t forget to use #StopHB2899 and #YallMeansAll when posting to Facebook, Twitter, or any other social media app!