The Texas LGBTQ+ community lost Cypress Ramos on Saturday, February 12 in Lubbock Texas. Cypress Ramos, 21, was, according to a friend, “a friend, a sister, a daughter. Cypress was always smiling. She was so tiny so it felt like my arms wrapped around her 3 times. She was so drama free — never in any anyone else’s problems. She just loved everyone.”

A bright light like Cypress deserved to shine bright for much longer than she did. Cypress died from blunt force trauma. Her suspect was quickly identified and has been arrested and faces a murder charge.

Ricardo Martinez (he/him), Chief Executive Officer of Equality Texas said, “The loss of Texans like Cypress is part of a heartbreaking epidemic of anti-transgender violence, particularly against transgender Black and Brown women  In 2021 at least 47 transgender or gender non-conforming people were killed by violence — 5 of whom were fellow Texans. That’s 47 people who deserve to be remembered and honored for far more than being part of a statistic — who lived with extraordinary courage, authenticity and love, just like Cypress.

Rachel Hill (she/her), Government Affairs Director, Equality Texas said, “2021 was the most tragic year on record for murders of transgender women, just like 2020 was was year before. We have to break the cycle in 2022. It’s up to us to fight for a world where transgender Texans are treated with the respect and dignity they deserve.

While politicians manufacture “emergencies” about library books Equality Texas is committed to working with those in power to enact real solutions to improve safety for our transgender community including policies that increase resources for transgender Texans and reduce barriers to employment, healthcare, public services, and shelter.”

A candlelight vigil honoring Cypress will be held at Tim Cole Memorial Park on February 19, 2022 at 7PM. 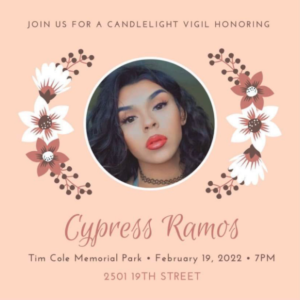