After months of doubling down on the discriminatory anti-transgender HB 2, North Carolina Governor Pat McCrory has officially lost his re-election bid to Attorney General Roy Cooper, who currently leads by 10,000 votes.

Today’s result is a clear rejection of anti-transgender discrimination and lawmakers who support it—and elected officials in Texas should take heed. 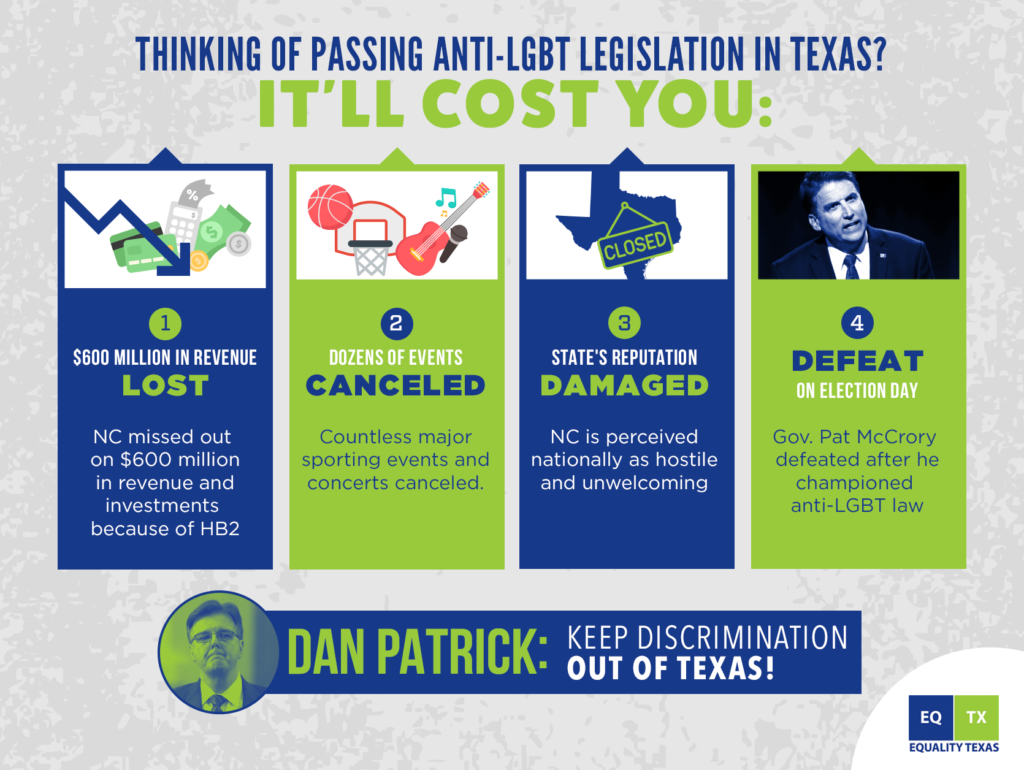 Since early in the season this race has been read as a referendum on HB 2. On election night the vote tally seemed to show that voters had had enough of attempts to divide the state and blow up its economy in order to discriminate against transgender people. But instead of gracefully conceding, McCrory engaged in increasingly desperate bids to overcome the vote margin, which continued to grow after Election Day.

McCrory filed complaints in half of the state’s counties on the premise that large-scale voter fraud impacted the election. These complaints were quickly rejected as baseless by the Republican-controlled local county election boards and the State Board of Elections. Claims of fraud were especially bizarre considering President-elect Donald Trump and Republican Sen. Richard Burr both won by strong margins in North Carolina. It’s clear now that voters were simply crossing party lines to to send a message: Discrimination is a losing platform on both sides of the aisle.

Equality Texas CEO Chuck Smith said the result today shows that voters are ready to move on to other issues, and that includes voters in Texas. They want their elected officials to focus on the economy and stop wasting time and sowing divisiveness:

“Governor McCrory’s ouster is just the latest evidence that Americans from all walks of life simply don’t support laws that discriminate against transgender people and destroy a state’s reputation. Here in Texas, voters are eager to see their lawmakers focus on the issues that matter—infrastructure, schools, spending. Wasting time on polarizing and unnecessary bills that demonize transgender people and undermine the ability of our cities and towns to set their own policies is a dangerous gamble that puts Texas’ economy and reputation on the line.”

So far HB 2 has cost the Tar Heel state $600 million in revenue and tens of thousands of jobs. The NBA, NCAA and ACC all pulled championship games out of the state, while businesses including PayPal, Deutsche Bank and CoStar scrapped expansions and instead took their business elsewhere.

That so many industries and sports leagues have pulled events from North Carolina over the anti-transgender law sets a precedent for consequences states like Texas should expect if lawmakers consider similarly discriminatory bills here.

And yet, Lt. Gov. Dan Patrick has vowed to push the exact same kind of discriminatory legislation when lawmakers return to Austin in January. His recent comments indicate he feels that Texas can somehow get around the economic consequences of pushing this legislation, even though his bill—the perversely named “Women’s Privacy Act”—is nearly identical to the disastrous HB 2. Lt. Gov. Patrick should instead heed the lesson out of North Carolina today: Lawmakers who insist on supporting discriminatory anti-transgender legislation that hurts our state’s economy will lose at the ballot box.

According to Smith, this goes for Texas as well:

“Over the past year, businesses and major athletic organizations have made it clearer than ever that they won’t remain in states where hostile laws are on the books. Texas is not immune to the types of economic backlash that’s ongoing in North Carolina. Texans, like all Americans, are eager to move forward and have our civic discussions grounded in the values we all share. There’s much to learn from what’s unfolded in North Carolina over the last year, and we hope Dan Patrick is watching closely. Discrimination doesn’t win.”

Equality Texas hopes that as lawmakers look toward the 2017 legislative session, they heed the lesson voters delivered. Texans want to see proactive legislation that makes our economy more competitive and protects everyone from discrimination. And if they don’t see that from the Statehouse this year, they’re likely to remember when they go to the polls in 2018.