The legislative session hasn’t even started and already some Texas lawmakers are filing bills designed to restrict the rights of LGBT Texans.

Today, those lawmakers are getting a wake up call. 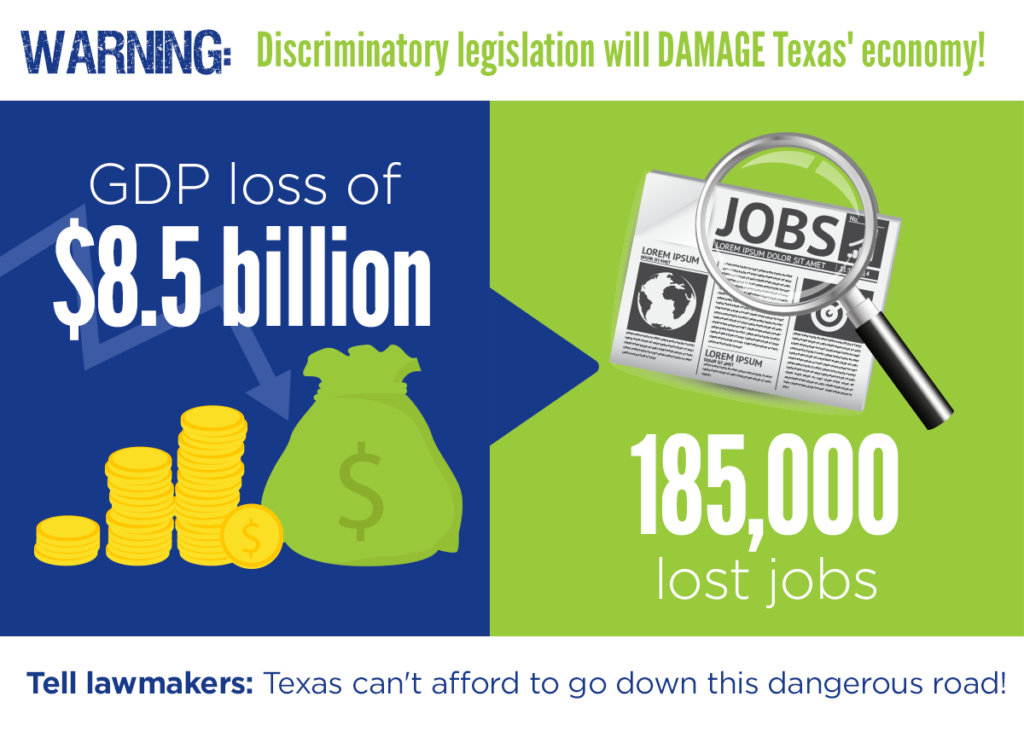 This morning, members of Keep Texas Open for Business—a coalition of businesses working to block legislation that would give “license to discriminate” in the Longhorn State—held a press event at the State Capitol to release a study on the projected economic consequences of anti-LGBT bills.

The findings are extreme.

Texas stands to lose 185,000 jobs and $8.5 billion dollars in annual GDP if lawmakers continue to push anti-LGBT legislation at the State Capitol.

Caroline Joiner of @TechNetUpdate: TX is facing a war on talent—and TX employers cannot afford to go down a path of discrimination. #TXLege pic.twitter.com/JsOzr24F2R

The analysis, commissioned by Texas Association of Businesses, is based on actual or projected losses in four other states—North Carolina, Indiana, Arizona and Louisiana—where similarly discriminatory legislation has been passed or proposed.

As a case study, North Carolina’s economy has been grinding to a halt ever since Governor Pat McCrory signed the heinous HB 2 law—a first-of-its-kind law that explicitly targets transgender people for discrimination by effectively banning them from using public restrooms because of their gender identity.

Despite the undeniable evidence of the economic havoc wreaked by HB 2, our own Lt. Gov. Dan Patrick has vowed to introduce a near replica of the bill in the Texas legislature this session—blatantly ignoring the economic implications and writing off the potential political downfall this type of legislation could precipitate.

Ultimately, 185,000 jobs and $8.5 billion dollars in economic losses don’t just impact the intended targets of anti-LGBT legislation. This type of economic fallout falls on the shoulders of ALL Texans. That’s why businesses are speaking out.

Our lawmakers should be working to grow business investments and ensure the long-term sustainability of Texas’ economy—not actively working to destroy it.

Click here to send a pre-drafted message to your lawmakers, sharing the dramatic results of the Keep Texas Open for Business study and urging them to block any and all legislation that would invite discrimination to Texas.