In the Texas legislature, everything can change in a week. This week in particular was full of surprises, twists, and turns that gave LGBTQ+ advocates a serious case of emotional whiplash.

Let’s start with where things stand: the legislature ended the session yesterday, killing SB 2, the anti-transgender sports bill. This is the direct result of your advocacy, your calls, emails, and testimony over the last 30 days. Although we’re still unsure what the future may hold, this in itself is something to be proud of. This year alone we have killed 20 versions of this bill in three separate sessions. This is a huge feat.

At the same time, we have to acknowledge the effects of what has been the most extreme Texas legislative session on all fronts, with legislative attacks on voting rights, abortion rights, classroom censorship, and racial justice. This past Wednesday 666 new laws took effect, many of which directly attack the civil liberties of all Texans.

At least transgender youth can breathe a sigh of relief today, knowing that SB 2 was defeated. However, we must continue to equip ourselves and fortify our resources, as we know there will be at least one more special session called for redistricting. We’re bracing ourselves for the possibility of yet another round of attacks on transgender youth, and need your support to prepare for another fight. Donate to the Special Session Fund today.

What Happened This Week

On Monday, Lieutenant Governor Dan Patrick gave the legislature an ultimatum: pass the transgender sports ban and a second ban on teaching about systemic racism or he wouldn’t pass a crucial bill that would fund the legislature.

Put bluntly, Dan Patrick would rather hundreds of families lose their livelihoods and health insurance during a global pandemic than let a few transgender kids play sports with their friends.

Back in June, the Governor vetoed a part of the legislative budget that included salaries and healthcare for all legislative staff and Capitol building workers just because the legislature didn’t pass 100% of his priorities. That funding had to be restored by September 30th for the legislature to function. It’s this money that Dan Patrick decided to hold hostage. 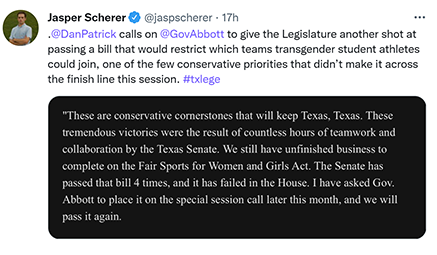 On Tuesday after the Lt. Governor’s ultimatum, Chairman Harold Dutton called a formal meeting of the House Public Education committee to hold votes on pending bills. Both advocates and opponents of equality lined the room waiting to see what would happen. Chairman Dutton brought up SB 2, the transgender sports ban, and after briefly noting that he knew of no cases of the “problem” the bill seeks to solve, he adjourned the meeting without a vote on the bill.

Two days later the legislature restored funding for Capitol workers while SB 2 died in committee. Dan Patrick did not follow through with his threat of shutting down the state legislature, but he wasted no time in asking Governor Abbott to add it to the redistricting special session in the near future. The Governor hasn’t shared any details about what the redistricting session will look like or when it will start.

A Message From Ricardo

As we wait to see how the rest of this year plays out we’ll leave you with a special message from our CEO, Ricardo Martinez:

“The damage SB2 has already inflicted is palpable — it is evident in the faces of children and families who are traumatized after a grueling second-called special legislative session, so much so that some of them have left the state to protect their families and escape the irreparable harm.

“But the worst of the legislative session also brings out the best in our communities. I’ve watched colleagues, friends, and organizers I don’t know but recognize fighting these reprehensible attacks on communities of color, classroom censorship, abortion rights, voting rights, LGBTQ+ rights, and I’m floored at their tenacity, courage, and passion to show up time and time again. What Texas organizers have lived through in 2021 is nothing short of a cruel and traumatic experience.

“These nine months have profoundly drained the selfless spirits of those who fight so valiantly to defend equality. And still, our work against the extreme anti-LGBTQ+ rhetoric and rampant violence in Texas continues. Now more than ever it is critical that we continue our fight for a more just Texas.”

Thank you for trusting us with this work, for believing in our efforts to coordinate a resistance to the anti-LGBTQ+ agenda, and for continuing to be engaged with us as we fight for the full lived equality of LGBTQ+ Texans. As we prepare for another special session, any gift you can offer to reinvest in our work is appreciated. Together, we can protect our community from the continued assault by opponents of equality.