Statement on the historic confirmation of Justice Ketanji Brown Jackson 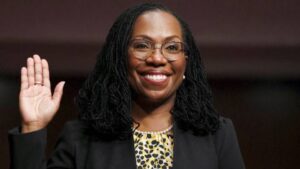 In addition to being the first Black woman, Judge Jackson will be the first former public defender to serve on the nation’s highest Court—bringing a valuable perspective on the true impact of the Court’s precedents. Judge Jackson is a brilliant legal mind with impressive qualifications and sound judicial temperament. We celebrate her historic nomination and believe the U.S. Supreme Court will be better with her voice on the highest Court.

At a time when the rights of LGBTQ+ people are at stake across the country, it’s more important than ever to have a #JusticeForAll on the Supreme Court. Judge Ketanji Brown Jackson is that person.