These bills, if passed, would open the floodgates of discrimination against transgender Texans—and right now, they’re slated for a hearing and vote in the Senate State Affairs Committee TOMORROW at 9AM.

We need to rally as many fair-minded Texans as possible to testify against SB 91 and SB 3 at the State Capitol at tomorrow’s public hearing. This could be our one and only chance to urge our Senators, face-to-face, to reject anti-transgender “bathroom bills.” We need you there.

RSVP to attend the public hearing on SB 91 and SB 3 tomorrow (Friday 7/21) at 9AM. Plan to get there early: Registration to testify starts at 8AM. 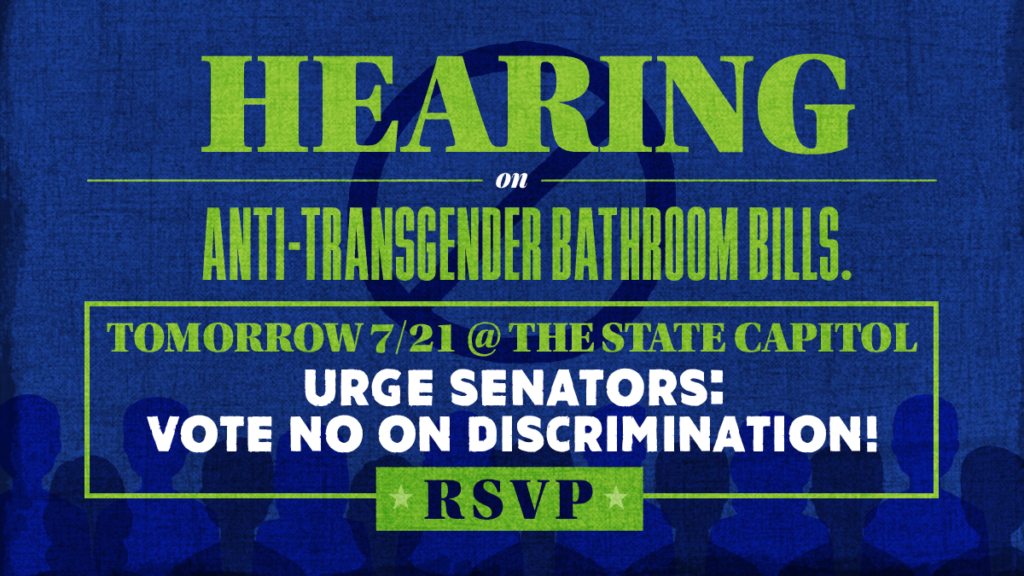 Make no mistake, the LAST thing our elected officials want is a crowd at tomorrow’s hearing.

That’s why Sen. Lois Kolkhorst waited until after midnight last night to introduce her shameful “bathroom bills.” And that’s why the Senate has only given us 24 hours notice between when the bills dropped and tomorrow’s public hearing.

The fact is: Texas lawmakers KNOW this type of discriminatory legislation is wildly unpopular. When Sen. Kolkhorst introduced a similar anti-transgender bill earlier this year, we rallied 1,800+ people to the public hearing—a vast majority of whom where there in protest.

Now, Sen. Kolkhorst and other extremist lawmakers behind the “bathroom bills” crusade are trying to subvert the will of the people by rushing a public hearing on SB 91 and SB 3 in hopes that no one shows up.

We can’t let them get away with this. We’ve got to show up to the State Capitol tomorrow en masse and make our voices heard to stop these heinous attempts to legalize discrimination against transgender Texans.

Join us tomorrow at the State Capitol, room E1.036 and make your opposition to anti-transgender SB 91 and SB 3 heard. RSVP now and plan to arrive at 8AM.

This could be our last chance to speak directly to Senators and make them see that a majority of Texans reject anti-transgender discrimination. Don’t miss it.

PS. In case you are unfamiliar with how public hearings work, here’s an FAQ about what to expect tomorrow. Wear green and blue to show a united front with Equality Texas. We’ll see you there!