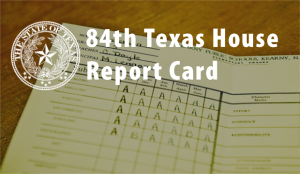 Rankings of legislators are always tricky. It’s difficult to include all the little things that happen behind the scenes, the influence of members on each other, or the true motivations or beliefs of individual members. That said, it’s important to acknowledge the public actions of the people elected to represent us. In compiling this top 10 we considered public votes, authorship of pro- and anti-LGBT legislation, filing of resolutions acknowledging the LGBT community and committee votes on issues affecting the LGBT community. Behind the scenes work and advocacy are not included.

There is certainly room for debate. We’d love to hear your opinion of the Top 10. How’d your representative do? Did we score them too harshly? Too favorably? Share this list with your friends and let’s have a conversation about how the people elected to represent us did over the last five months.

Check out the 10 worst members of the House during the 84th regular legislative session HERE and the full scorecard HERE.

Well of course Roberto Alonzo is on the list of top 10 House members on LGBT issues! First elected to the House in 1993, the Dallas Democrat has been a stalwart defender of the LGBT community, having worked for almost a decade to pass protections against discrimination in insurance. Alonzo serves on the powerful House Calendars committee, which determines the order that bills will be heard on the House floor. He is a tireless ally and works hard to stay in communication with Equality Texas and up to date on LGBT issues.

Sometimes the greatest heroes are the ones who were in the right place at the right time and did the right thing. Rose, a second term Dallas Democrat, had a stellar voting record her first session. This session she found herself on both the House Juvenile Justice and Family Issues and the House Human Services Committees. In the latter, she helped pass both Sylvester Turner’s Homeless Youth Study and Rep. Deshotel’s Gestational Agreements Bill (which would allow Texas Courts to enforce gestational agreements entered into in other jurisdictions). In the former she cast the lone dissenting vote against Scott Sanford’s Indiana-style RFRA for child welfare service providers (which would go on to become the amendment Sanford would not stop trying to attach to everything that moved). Standing up for what’s right when you’re the only one willing to do so isn’t easy. The LGBT community owes a huge debt of gratitude to Rep. Rose and her place on this list is well deserved.

Anchia is one of the most outspoken LGBT advocates in the House. For years he has worked to passed legislation to ensure that children with two moms or two dads have accurate birth certificates. (Check out his impassioned speech in support of the bill below). This year, thanks to the support of House State Affairs Committee chair Byron Cook, he got closer than ever before. Anchia’s HB 537 was not only passed by the State Affairs Committee with bipartisan support, it gained a bipartisan joint author, Rep. Sarah Davis, and was placed on the House’s schedule for consideration. Unfortunately the clock ran out before the bill could come up for a vote. Anchia also offered one of several speeches on SB 2065, the Pastor Protection Bill, demonstrating that Religious Liberty and Equality are not in conflict and can stand side by side.

Turner is one of the elder statesmen of the legislature. He serves on the powerful State Affairs and Appropriations Committees and is a member of the Legislative Budget Board. That’s a considerable amount of legislative heft and this session Rep. Turner brought it to bear for the LGBT community. He is the author of legislation currently awaiting Gov. Abbot’s signature to study the issue of youth homelessness in Texas and seek solutions. Additionally, Rep. Turner’s deft questioning during the debate on SB 2065, the “Pastor Protection” Bill, successfully narrowed the intent of the legislation – something that takes a lawmaker with the experience and acumen of Turner to accomplish. Rep. Turner announced during the last week of session that he will not run for re-election as he is pursuing other opportunities. The lack of his presence will be palpable next session.

Collier is the joint author of Mary González’ HB 70, Public School NonDiscrimination and HB 71, Romeo and Juliet Equalization. She is a tireless advocate in a thousand little ways, but the best way to examine that is to look at one of her smallest pieces of LGBT advocacy this session. Collier joint-authored HR 2326, recognizing the life of Mary Edwards, the grande dame of Fort Worth LGBT advocacy. The resolution recognized the amazing contributions of Edwards to her community and while that’s a small thing, it’s only the third time in the last decade that the Texas House has passed legislation that even acknowledges the existence of LGBT people. Sometimes the most powerful advocacy happens when small gestures add up to change the culture. Rep. Collier is an excellent example of how to do that.

The only freshman to make the list, when Israel was sworn in last year after winning her seat in a special election she became only the third out LGBT lawmaker in Texas history. Israel quickly became a force to be reckoned with on transportation and elections issues with four pieces of legislation either authored or sponsored by her on the governor’s desk. That kind of hard work earned her the title of the Legislative Study Group’s Freshman of the Year. Her accomplishments are impressive for any lawmaker, let alone a freshman, and it will be exciting to see what Israel will accomplish as she continues to season into a very able lawmaker.

Reynolds is the joint author of bills to equalize the Romeo and Juliet defense, to create nondiscrimination protections in public schools and to end discrimination in insurance. He is a lawmaker with heart and brains, but perhaps the most impressive piece of LGBT advocacy Reynolds pulled off this session had more to do with his appendix, or lack thereof. Towards the end of session Reynolds was hospitalized with a dangerously ruptured appendix. He was supposed to rest and heal for several days, but when it became clear that Rep. Scott Sanford would once again attempt to amend his bill to allow tax-payer supported child welfare service providers to discriminate against LGBT families Reynolds left his sick bed and went to the House floor to be certain that Sanford wouldn’t have the votes needed to pass his amendment. That’s dedication! That’s Ron Reynolds.

Turner is the author of HB 582, which would have required state contractors to adopt inclusive nondiscrimination policies. Last fiscal year the state executed almost forty-thousand contracts. Turner’s proposed bill would have extended employee protections to thousands of Texans who can currently be fired from their jobs for no reason other than who they love or who they are. He is also a co-author of Rep. Johnson’s state-wide employment nondiscrimination bill and Rep. Anchia’s birth certificate and freedom to marry bills. The Grand Prairie, 3-term representative proved himself a dedicated and able ally this session and we can’t wait to see what he does next.

González is the only out pansexual-identified elected official in the country. This session she accomplished what no one else has been able to do in more than a decade of trying: get a Romeo and Juliet equalization bill to the House floor. Although the bill was voted down by the House, it received bipartisan support both in committee and on the floor. That kind of across-the-aisle work has become the hallmark of the El Paso county lawmaker’s legislative career. González, just by being her authentic self, has changed hearts and minds around the capitol, but it’s by being a hard-working, smart and dedicated lawmaker that she’s proven that LGBT people can succeed in any field given the opportunity.

Since first being elected to the House in 1995, if there was an opportunity to fight for the LGBT community, Farrar was on the front lines. She filed some of the first legislation to provide employment protections, some of the first public accommodations bills, and has been an indefatigable advocate for twenty years. Farrar’s position on the powerful State Affairs committee put her in a position to speak on behalf of LGBT people in hearing after hearing this session, and she took to the role of stalwart defender with gusto. Time and time again this session Farrar’s was the voice of compassion, reason and justice.

If there were an LGBT Caucus in the Texas House, Garnet Coleman would be its dean. Coleman filed the state’s first freedom to marry legislation, the first gender markers correction legislation, the first transgender hate crimes protection legislation… the list goes on. So when the Senate tried to sneak an anti-freedom to marry amendment onto one of Coleman’s bills not only was it particularly insulting, it was laughable. “If I can’t get it off, then the bill goes to bill heaven,” Coleman told the Houston Chronicle. “I don’t support that legislation or that language.” True to his word Coleman worked to kill his own bill to prevent the amendments passage. That’s dedication. That’s a true ally. That’s the action of someone who looks out for all Texans and puts the needs of the people ahead of himself. Which is who Garnet Coleman is.