Texas is leading the nation with the number of anti-LGBTQ bills filed. Currently 26 discriminatory bills have been filed in the Texas House and Senate this session that directly attack LGBTQ people with regard to restroom access, roll back of local nondiscrimination protections, and provide religious refusals for child welfare providers, county clerks, medical professionals, counselors, wedding service providers, and more.

SB 522 voted out of the Senate

On Tuesday by a vote of 21-10, the Texas Senate voted out SB 522, a religious refusal bill that would allow clerks to discriminate and refuse to issue marriage licenses based on a “sincerely held religious belief”. Like many of the religious refusal bills filed in the legislature this session, SB 522 radically redefines religious liberty in Texas and seeks to use religion as another way to discriminate against same-sex couples. Sen. Sylvia Garcia said this about SB 522:

“Each county clerk and judge in Texas said they would ‘faithfully fulfill their duties and follow the laws of this state and this country so help me God’ and that includes their duties to process eligible marriage certificates for same-sex couples.”

SB 522 now moves to the House, where it has not yet been referred to a committee.

On Wednesday, the House State Affairs committee voted out HB 3859, a religious refusal bill that would provide child welfare providers the right to refuse to service clients if doing so conflicts with a “sincerely held religious belief”. The bill is currently being considered by the House Calendars Committee, which will meet next week to discuss placing on the general floor calendar. 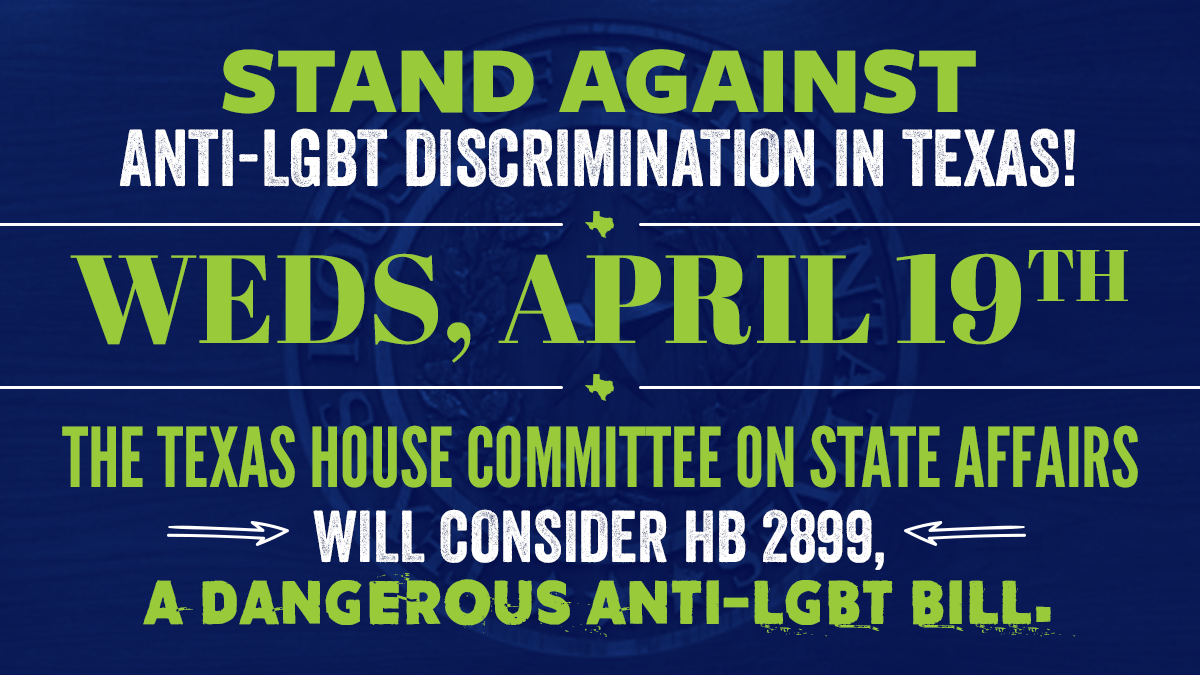 On Wednesday, April 19th, the House State Affairs Committee will hold a public hearing on the committee substitute for HB 2889, a bill being hailed as a replacement to SB 6. HB 2899 will be amended by the author to be CSHB 2899, and would ban municipalities and school districts from enforcing ordinances, orders, or other measures that protect transgender Texans from discrimination when using restrooms or changing facilities that correspond with their gender identity. Read the proposed language here.

To be clear, this bill being promoted as an alternative to SB 6 by Texas lawmakers is unacceptable. CSHB 2899 is discriminatory and will leave thousands of transgender Texans without protections and vulnerable to harassment and violence.

Call your State Representative and tell them to oppose HB 2899, the fake alternative to SB 6.

Please join us at the Texas Capitol in Austin on the afternoon of Wednesday, April 19th to testify or drop a card in opposition to HB 2899. For more information on Wednesday’s hearing, please visit the following links.

FAQs for the hearing on Wednesday

On the same day as the hearing for HB 2899, the Senate Health and Human Services Committee will hold a hearing on SB 892, the Senate version of HB 3859, the religious refusal bill that provides child welfare providers the ability to refuse to serve clients based on a “sincerely held religious belief”. The hearing will begin at 8am on Wednesday. If you plan on being at the Capitol on Wednesday, please make sure to drop a ard or testify in opposition to SB 892.

On Monday, April 17th, the House Business and Industry Committee will hear testimony on HB 192 by Rep. Bernal. HB 192 would add sexual orientation and gender identity and expression to the list of protections in housing discrimination.

As they continue to attack the rights of LGBTQ Texans at every corner, the team at Equality Texas will be there to fight back. Together, we will send a message that discrimination is not a Texas value.