Today is the last day of early voting for the Democratic and Republican Party primaries. Primary day is next Tuesday, March 6th.

We have an opportunity to create a state that reflects our values and priorities. We must come together and fight for the state we want.

Now is the time to act with your vote. It is your civil right and your civic duty. We cannot sit this out. It’s time to Queer the Vote, Y’all! 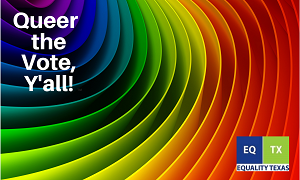 Equality Texas urges its members to support the following candidates in the March 6 primaries, all of whom have been endorsed by the Texas Equity PAC, the political action committee of Equality Texas:

Equality Texas urges its members to support the following federal candidates in the March 6 primaries:

Where do candidates stand on bathroom regulations? Click here to see where candidates for the Texas House of Representatives stand on “bathroom bills”. (Best viewed on desktop rather than mobile device.)