As of this morning, 30 anti-LGBTQ+ bills have been filed that directly target our community, and there’s still a full day left of bill filing. To put that in perspective, as of today’s numbers, Texas bills account for almost 30% of all anti-LGBTQ+ bills filed nationally.

This is a drastic escalation from our opposition. Last session, only 19 total anti-LGBTQ+ bills were filed. This surge of direct legislative attacks only highlights that these bills aren’t being filed to actually solve problems, but to distract from the true emergencies Texans are facing, from the pandemic, to the economic crisis, to fixing the electric grid.

It is urgently important for all Equality Texan to take action right now to hold the line and protect the humanity and well-being of our community. No action is too big or small. Click here to review all the various ways you can get involved right now.

Today is the deadline to file bills. Next week, we’ll share with you the full picture of what our community is facing in the next few months of session.

This Monday, March 15, two pro-LGBTQ+ bills will be the first good bills to get a hearing this session, in the Criminal Jurisprudence committee: HB 73 (Hinojosa, D-Austin), which would eliminate the gay/trans panic defense, and HB 1402 (A. Johnson, D-Houston), which would make sure that transgender Texans are covered by the James Byrd Jr Hate Crimes Act.

If you’d like to provide written testimony on these or any other bills, we will ensure it gets to the committee through this portal. If you’re vaccinated and feel safe going to the Capitol, please contact rachel.hill@equalitytexas.org to learn more about how we can support you. 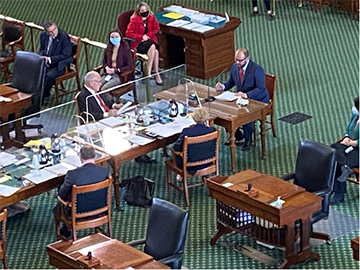 The first anti-LGBTQ+ bill to get a hearing this session was SB 247 (Perry), which would allow someone licensed under the state bar of Texas (like attorneys) to refuse service without disciplinary action to anyone, including the LGBTQ+ community, if that individual violates a “sincerely held religious belief” of the licensee. Equality Texas was able to coordinate in-person and written testimonies. Thank you to everyone who provided written or in-person testimony on this bill.

Yesterday Representative Jessica González and Senator José Menéndez filed HB 3860 and SB 1540 respectively that introduced new modern legislation that will proactively protect our community and ensure that every single Texan, including LGBTQ+ Texans will be treated equally under Texas law.

Of the new anti-LGBTQ+ bills filed this week, we saw three bills banning transgender youth participation in sports, two bills banning best-practice life saving medical care for transgender youth, two bills that would endanger local nondiscrimination ordinances, a bill that would allow doctors to refuse medical care based off their “sincerely held religious beliefs,” and a bill that would prohibit teachers from talking about inequity or oppression in class.

The end of bill filing and start of committee hearings means we’ve entered the phase of the legislative session most focused on public input. Now more than ever is the time to get involved in our work at the Capitol. We’ll keep you up to date on which bills are moving so that you can contact your legislators and share your story with written testimony. You can also donate to help increase our capacity to mobilize constituents in key districts as the session heats up.

No action is too big or small. What will you do to protect LGBTQ+ Texans today?

The below pro-LGBTQ+ bills will be heard in the Criminal Jurisprudence Committee Monday, March 15 at 2 PM:

HB 73 (Hinojosa, D-Austin) – HB 73 would limit the legal defense known as gay/trans panic. This legal defense, which claims that a person’s sexual orientation or gender expression can trigger violence against another person, was debunked by the American Psychiatric Association in 1973.

HB 1402 (A. Johnson, D-Houston) –  The James Byrd Jr. Hate Crimes Act authorizes enhanced penalties for violent crimes motivated by bias against the victim’s race, religion, color, sex, disability, sexual orientation, age, or national origin. The law should be updated to include gender identity and expression. According to a report by the National Coalition of Anti-Violence Programs, anti-LGBTQ violence, particularly against transgender women of color, is on the rise. Hate-related homicides spiked 86% in 2017 and in 2019 Texas was tied for the most transgender murders in the nation.